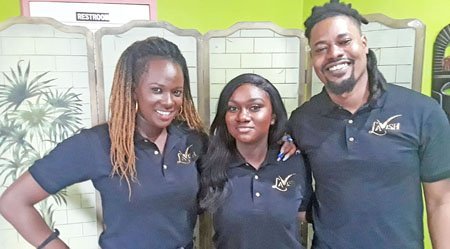 The carnival Mas’ band known as ‘Lavish’ has said they were forced to refund masqueraders tens of thousands of dollars after they failed to deliver costumes for the 2019 festival.

Band leaders held a press conference to among other things take responsibility for last year’s debacle which left dozens of paying masqueraders with only parts of their costumes and others with nothing at all to wear for the two-day carnival parade.

The band leaders, who is the father and daughter duo of Wilt ‘Tall Pree’ Cambridge, a star on soca circuit and Ebony Telesford, said they have put a full management structure in place and fired their costume maker from last year in an effort to make a better showing for the 2020 August festival.

In an exclusive interview, Ebony Telesford explained that they were not able to fulfill their obligations to paying masqueraders because of late delivery by the Trinidad outfit which was contracted to make their costumes.

She said not all their pieces were ready when they shipped a crate to Grenada and the remaining pieces, shipped later, were not delivered in time for carnival.

According to Telesford, about 50 people who paid for their costumes online did not receive it and there were several cancellations as others became anxious as the festival drew near and they remained without what they had paid for.

Telesford disclosed that the online company through which transactions were conducted, had to refund $86, 000, including fees and charges.

‘ Lavish’ is not naming their new production team but said they won’t be using a company from Trinidad and Tobago, this year.

Telesford said it is “not feasible” to produce costumes in Grenada because materials and supplies are expensive.‘ Lavish’ is not a competition band.

Other measures to safeguard against another costume crisis includes an increase in the management team and the hiring of laid staff, including a large marketing team, the band leader explained.

The 2020 presentation is aptly named, ‘Redemption’.

“We see 2020 as the redemption, we want to make good on our promises of 2019 and renew masqueraders’ faith in the Lavish brand,” said Telesford.

Telesford said the band will cater for 500 band members. Last year the band was expected to be 650 strong.