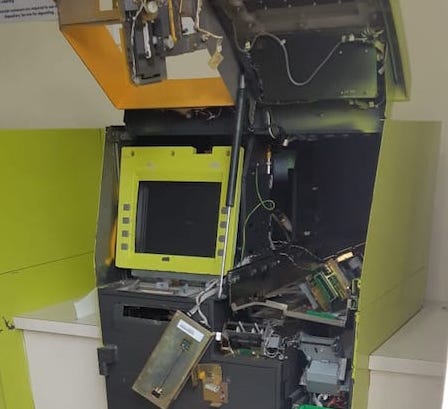 Police have detained one man in connection with the damage done to an ATM Machine in the city Monday night that belonged to the Grenada Co-operative Bank Limited (GCBL).

The suspect has been identified as “a mental patient” who is from the Belle Vue area of Beaulieu in the St. George North-east constituency.

A police insider told THE NEW TODAY that the apprehended man normally sleeps in the abandoned St. James hotel, at the foot of Police headquarters at Fort George that was once known as Fort Rupert during the days of the 1979-83 Grenada Revolution.

The suspect is very familiar to law enforcement officers.

A police officer who is familiar with the arrested man expressed doubts that he was “crazy” but said that he was often seen walking around town “with a retarded woman, and was sent to jail for brutalising her at one time.”

“…He is a sicko. The only thing that they can do with him is put him in the Mental,” said another person who is acquainted with the suspect.

THE NEW TODAY understands that the suspect did not manage to get away with any money from the ATM, located on Church Street, St. George.

The attack on the Teller Machine took place Monday night when the country was under a curfew due to the State of Emergency to help combat the coronavirus situation in the country.

The city of St. George is known to be full of abandoned buildings that are occupied in the night by vagrants who have in the past lit fires that caused devastating damages to buildings.