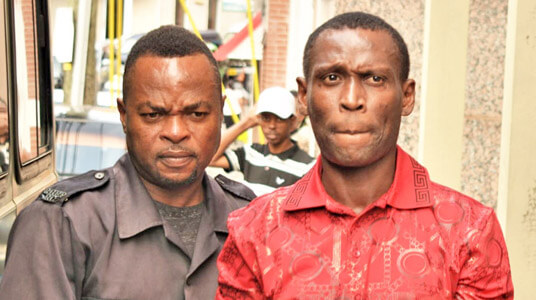 “Sukie” – picked up by local police for indecent assault

Controversial Dominica entertainer 36-year old Shane “Sukie Burn Brain” Edwards is once again in trouble with the law but not in his homeland.

Known by others as “Sukie”, the artiste was arrested in Grenada last weekend and charged by police with one count of Indecent Assault.

Several Dominicans are not surprised at the arrest with many describing the entertainer as a time bomb when it comes to running into trouble with the law.

One Dominican told THE NEW TODAY that “Sukie” is considered as a “repeated” offender and is not considered as “a favourite” in the country.

“He is challenged with good discipline and regularly in trouble with the law. Members of the public tried and continue to try to assist him to be a good citizen but he is not showing sign of coming around,” he said.

The Dominican also pointed to allegations surrounding Sukie of sexual misconduct on a visit to neighbouring St. Vincent and the Grenadines.

“There was a report where Sukie went to SVG and did the same thing as in Grenada with a 15 year old but for some strange reason was given a slap on the hand and there was no charge filed,” he remarked.

According to the Dominican resident, many have always been fearful that he will cause embarrassment to the country.

Sukie was also arrested in Dominica and charged with battery on a female and threat and was remanded in custody for the alleged offence.

However, he was given bail after a month in the lock up.

His trial for the offence of threat and battery is scheduled for a hearing in the Roseau Magistrate court on Tuesday.

Since his release in October, the artist has performed at many events around the Caribbean region.

The entertainer travelled to Grenada over the weekend to perform alongside other artistes but was picked up by Police on Friday night following a criminal complaint from a guest who was staying at the same hotel with him.

Sukie was charged on Saturday, was denied bail and could not perform at the show.

He appeared before Chief Magistrate Teddy St Louis on Monday but was again denied bail and sent to the Richmond Hill prison on Remand.

Under Grenada’s Criminal Code, the charge of “indecent assault” is a summary offence that carries a maximum prison sentence of 5 years.