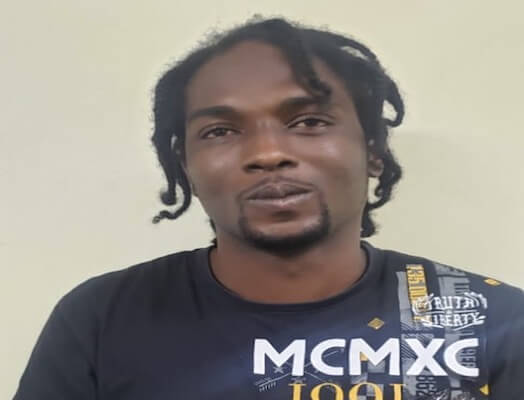 A primary school student in Gouyave has become the latest victim of gun violence in Grenada.

The boy was shot in the shoulder last night after a stray bullet entered his home in the wee hours of Saturday morning during an altercation between two men on the Lance in Gouyave.

Police have confirmed the shooting incident but did not give any details.

However, the police have detained an individual by the name of Jonathan “Not Nice” Richards for questioning after a massive manhunt was mounted for him.

Reports from witnesses in Gouyave say the suspect first fired a shot in the air as the man with whom he was involved in the altercation tried to flee from the scene.

Another shot was fired in his direction as he ran towards a residential area and according to witnesses in the area the bullet penetrated the wooden house where the boy lives with his mother.

The boy, a student of the St John’s RC School, described as a good athlete by those who know him, was rushed to the St. Georges General Hospital and treated for the gunshot wound. The bullet is said to have exited his body.

From since early Saturday there was a heavy police presence in the area and police also searched the vicinity of Richards’ home on the Lance.

A “wanted” notice was issued by the police who warned the public that 25-year-old Richards may be armed and dangerous and should be approached with caution.

However, a second bulletin put out by the lawmen a few hours later disclosed that Richards was apprehended.

The suspect is believed to be running an unlicensed bar business in the notorious ‘Gun Battle’ area on the Gouyave seashore.

Reports from Gouyave say the shooting incident was sparked by a conflict between a brother of a young woman who was in an argument with Richards after she intervened to defend another person who was being hassled by the suspect now in police custody.

This is the second shooting incident linked to Richards – some time ago a man was shot in Gun Battle and Richards immediately went into hiding, later retaining legal counsel and turning himself in to Gouyave police, a source said.

A cousin of Richards said he had also been picked up by police in the past and investigated for illegal gun possession.

The Royal GrenadaPolice (RGPF) has been very tight-lipped about the Gouyave shooting incident.

When contacted by THE NEW TODAY, the Police Station in Gouyave confirmed a shooting had taken place but said the details should come from the Community Relations Department (CRD) of RGPF which is not opened on the weekend.

According to a senior police officer, when CRD is closed, such information should be provided by the Criminal Investigation Department (CID) officer in the Division or the Officer in charge of the division who normally holds the rank of Superintendent.

He said that there appears to be a breakdown in the system with some police officers not living up to their responsibilities.

However, a police insider said that he had heard that the youngster might have been shot from a stray bullet following an incident between two male individuals.

Unconfirmed reports indicate that the shooting took place during the nightly Covid-19 curfew hours from 12 midnight to 4.00 a.m.