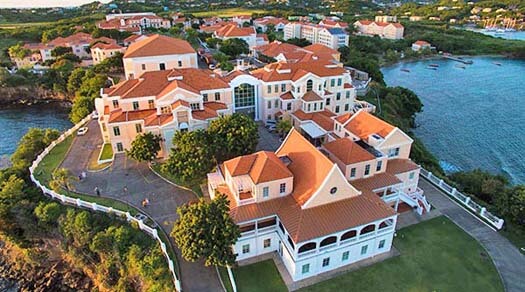 There is worry among local staff at the St George’s University (SGU) that relaxed COVID-19 prevention protocols could put unvaccinated family members in danger.

According to the faculty member, students are not quarantined on the campus after entering the country and are free to mingle with the wider population of Grenada.

On Friday, school authorities at the True Blue campus were engaged in contact tracing among the housekeeping staff after a female student began to show symptoms, the SGU faculty member told THE NEW TODAY.

“They were desperately trying to do contact tracing and testing among housekeeping staff after one student tested positive.

“This is an indication of how the rapid test is not working,” said the SGU Professor.

Under Public Health protocols in Grenada anyone arriving in the country must show a negative PCR test and must be quarantined for two days even if fully vaccinated. The unvaccinated are still required to spend almost a week in quarantine.

The SGU has initiated a mandatory vaccination policy for all students and faculty but our source said the atmosphere on campus is still very uncomfortable and fearful.

Vaccinated people are still able to get infected and can transmit the virus.

“It is a very uncomfortable situation. We were supposed to be vaccinated but we live with families who are not so this discriminatory practice is very worrying. They say we won’t get sick once we are vaccinated but that does not mean we can’t bring it home to our families, the Professor remarked”

The University has full testing capabilities at an in-house lab but according to our source after the rapid test at the airport quarantine is not enforced pending a PCR test according to Grenada’s public health protocols.

There is fear that the situation is made worse because students are generally not wearing masks although they are required to.

Dr George Mitchell, a member of the Grenada COVID-19 team has denied that SGU students are not being made to quarantine like everyone else.

Related:  Government makes it illegal for unvaccinated to work

“That is not true. Everyone goes into quarantine,” he told THE NEW TODAY on Saturday.

Our source described the situation as a double standard that is dangerous to the wider Grenadian population because the students are also out partying at clubs in Lance Aux Epines.

“Breweries and Junction packed on the weekend. It’s like a time bomb waiting to explode with students and locals jam packed inside there,” said the faculty member who resides in Lance Aux Epines.

SGU is preparing to resume on-Campus lectures on August 16 and the school has set a deadline of August 15 for all vaccination cards to be uploaded to its web portal but the faculty member said that despite the mandatory vaccination policy local staff are still on pins and needles.

Some members of the teaching staff have made requests to teach from home but those requests have been denied and our source said the atmosphere is far from normal.

“It’s like a cemetery down there (SGU campus). They want people to believe that everything is back to normal but people are afraid. They don’t trust each other,” she said.

SGU was the first to announce a policy of mandatory vaccination for its campus. It came into effect on June 15 and since June 16 about sixty Grenadian workers have been locked out of their jobs after they refused to take the AstraZeneca vaccine.

They have been involved in public protests ever since.

The faculty member believes that SGU risks losing a lot of the goodwill of the Grenadian community which it had enjoyed.

“Many of us who took the vaccine did so because we need to keep our jobs. We were not given options, it was an ultimatum and the government released their obligation and gave it to them (SGU). They gave us ultimatums and deadlines, they did not give us choices and SGU will lose a lot of the goodwill it enjoyed in the Grenadian community,” she said.