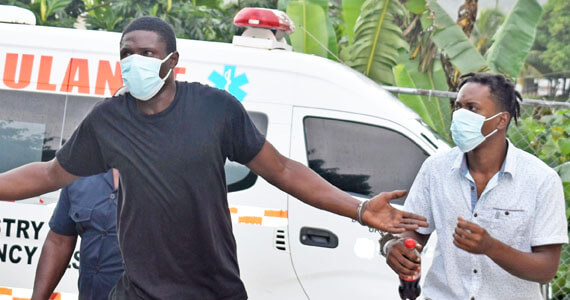 Two St. David’s men who were arrested and charged in connection with the most recent Burglary, Robbery and Rape incidents to occur on the island have been remanded to the Richmond Hill prison until January 26.

The suspects – Prince Harry, a 25 years old Landscaper of Vincennes, and Alden Joseph, 29 years old Labourer of Dudmar – are jointly charged with the offences of Burglary (two counts) and Robbery with Violence (two counts) following a January 1 incident at Syracuse, St. David in which both men allegedly broke into two separate houses at night, and committed the offences.

They appeared before Magistrate Kinna Marrast at the St. David Magistrate’s Court last week Wednesday and also on the following day and were remanded to prison until their next court date.

The suspects are being represented by Attorney-at-Law Jerry Edwin, who indicated to the court his intention to proceed in the matter with a paper committal.

“They have made statements to the police and in those statements they have effectively admitted their role in the matters…because these matters are indictable,” he told reporters.

“The court … has set January 26 as the date when the paper committals will be signed,” he said, adding that the matter will be committed to the High Court for further proceedings.

Attorney Edwin does not anticipate a trial in the matter based on the statements that were made to the police by the suspects.

He stated that “there is nothing that could be said that is exculpatory that is to absolve them of their role here.”

“We know that drugs and alcohol were involved, but a woman was violated in the most horrendous way,” he remarked.

According to Edwin, he does not expect “to mount any defense in this case except to ask the court for mercy and justice to be married so that this matter can quickly be resolved and the victim in this case find some way to bring closure because we are seeing way too many of these offenses.”