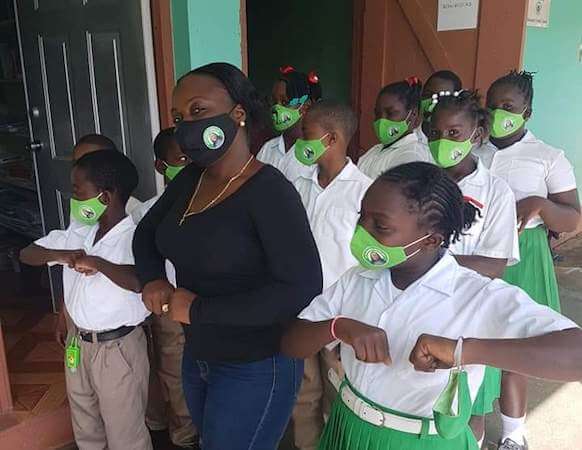 Youth Minister pose with the school children and the face masks

The distribution of political brand face masks to school children by Member of Parliament for St. Andrew North-east, Kate Lewis has drawn criticism from the public.

On Wednesday, Youth Minister Lewis posted a series of pictures of students from the Belair Government School and the Sacred Heart Roman Catholic School, Tivoli wearing face masks branding with her image.

The post said in part, “it was a pleasure to distribute branded masks to the students of the two primary schools in my constituency. Masks produced by the participants for the Garment Production Cooperative.”

This has not gone down well with members of the public and the Minister, who is a member of the ruling New National Party (NNP) government of Prime Minister Dr. Keith Mitchell, has been accused of exploiting the students for political gain.

THE NEW TODAY contacted the Minister, a former secondary school teacher for comment but she said that she did not wish to comment on the matter before abruptly ending the call.

Minister Lewis is seen in the photos posing with the students from the two schools.

The post has since been removed from her social media page, likely as a result of the mounting negative comments on social media sites.

The Kate Lewis masks were produced under a government funded youth skills training programme, which also raises concerns about a State-funded programme being used to produce political branded material.

While the United Nations Charter on the Rights of the Child says that children have a right to a say in how their communities are shaped and a right to freedom of expression, the blatant use of children and the images of children for partisan political gain is highly frowned upon.

Several years ago Civil Society developed a set of election campaign guidelines for parties and among them was that children would not be used for campaign purposes.

At the time, Dr. Mitchell’s NNP was the only political organisation in the country which refused to sign on to the Charter.

During the 2018 general elections campaign, Education Minister Emmalyn Pierre also used children and the images of children to further her political interests.

THE NEW TODAY was unable to reach Minister Pierre for comment on her colleague minister openly distributing political branded material in schools.