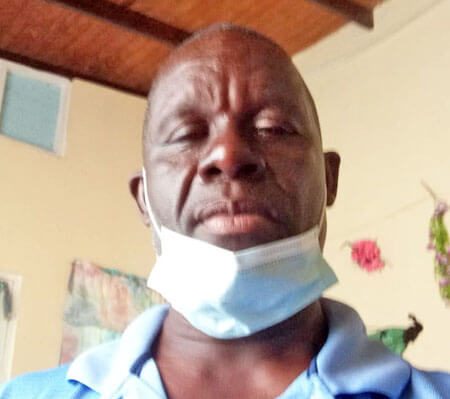 Jude Regis – the Café fisherman who was scared after coming in contact with U.S Coastguard personnel in Grenadian waters

It was a very frightening experience.

Those were the words used by Café, St. Andrew fisherman, Jude Regis to describe his ordeal at sea Sunday afternoon after his little fishing boat was chased down by a US Coastguard vessel well inside Grenadian waters.

Speaking to THE NEW TODAY on Monday, Regis said the incident happened about 5 miles outside Grenville when he and another man set out to sea on a fishing expedition.

According to the fisherman, they were in the process of going onto a fishing ground about ten miles out when they spotted what appeared to be a trawler.

‘We sighted the boat from a distance …we thought it was a trawler,” he said.

Regis said they passed the ship but soon realised that it was coming after them.

Regis stated that when he realised that the other boat was still coming in their direction he instructed the other guy to take the boat “a little bit more north” to see if they were really coming after them.

He said the other boat was still coming in their direction and he gave instructions to turn the little fishing boat around and head back to shore.

“They were coming directly towards us and after we were a little distance from them then we saw a smaller boat coming – it passed the bigger one and was coming towards us,” he added.

“The guy that was driving (the boat), I told him don’t stop, keep going, I don’t know who it is, let’s head for shore,” he said.

The local fisherman said that when they intercepted his boat, he then realised that it was a U.S operation as he noticed that the men on the smaller of the two vessels had on clothing with markings depicting them as U.S Police.

The Café resident then informed them that he was a U.S citizen.

“…I said to him that I was a U.S citizen – I live in America but just here on vacation – I didn’t go back because of Covid and am here for an extended period of time. After I said that to him, he said if you are a U.S citizen we have no right to be here on the boat but just because I couldn’t show ID they still proceed to do what they wanted to do. They came on the boat, they held us and then they radioed to the Barbados authorities,” he said.

Regis indicated that it was then that one of the guys from Barbados came onto the fishing boat and proceeded to carry out a search.

“He searched and then said everything was fine. They called back to the base and I could hear a lady’s voice asking them to do further search on the boat.

According to the Grenadian-born fisherman, they swabbed the boat, put something in a plastic and sent it back to the bigger boat.

Regis told THE NEW TODAY that they were then asked for their names and were held captive for about an hour-and-a-half in totality by the U.S Coastguard personnel.

He said that the little boat was by then taking in water and told them that “we have to move the boat and had to try and get the water out of the boat” but they refused to offer any help.

“It was a very frightening experience – I have never seen that before and that never happened to me before,” he remarked.

The fisherman believes that the U.S Coastguard should not be allowed to operate in Grenadian waters without local personnel accompanying them.

Regis said that he will be visiting the U.S embassy at Lance Aux Epines to lodge a formal complaint about his ordeal at the hands of U.S Coastguard personnel since he believes that they and the Barbadian had no right to carry out the search on his fishing boat in Grenadian waters.

The United States has often sent its Coastguard into Caribbean waters to engage in drug interdiction operations.