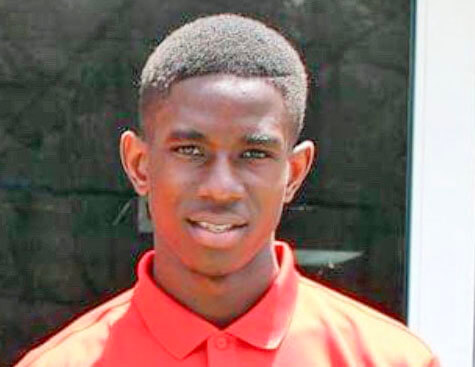 Gamali Felix – burning up the tracks in the United States

A leading member of the Grenada Olympic Committee (GOC) has challenged claims made by an official in the Ministry of Sports over the criteria set by Olympic Solidarity (OS), an arm of the International Olympic Committee (IOC) for local athletes to qualify for scholarship funding.

The ministry official made the statement while defending government’s policy on offering financial assistance to local athletes on full scholarships at schools in the United States.

The family of up and coming US-based 400 metre runner, Gamali Felix had complained to THE NEW TODAY about lack of financial support being given to the athlete who in March won a major national junior athletic championship in the United States.

The government official said that Felix will have to run the 400M under 45 secs in order to qualify for funding from the Grenada Olympic Committee (GOC) under OS programme.

She pointed out that his winning time of 46.63 secs in capturing the 2021 NJCAA national indoor championship is outside of the qualifying time for funding.

According to the Ministry of Sports employee, Grenada was trying to put together a 4 x 400 relay team for the Tokyo Games later this year with a young team of promising athletes who did manage to get onto the IOC programme for financial assistance.

However, she said that Grenada did not qualify among the top 16 countries in the world with a 4 x 400 team for the Olympic Games in Tokyo as the effort fell through when 400 metre Olympic gold medalist at the 2012 Games in London, Kirani James fell sick.

However, a top member of GOC accused the official from the Ministry of Sports of peddling false information.

She said: “The information is false. There is no time set – you don’t have to reach any particular time to get support from Olympic Solidarity. All those things are lies.”

The local Olympic committee member was critical of some of the officials within the Ministry of Sports and accused them of personally benefitting themselves from “free money” from GOC.

“It has a lot of them that are receiving free money so they will support the bosses of the Olympic Committee in their lies,” she said.

GOC is currently engulfed in turmoil with a faction trying to unseat the incumbent President of the body Royston La Hee and his allies on the executive over their inability to account for EC$440, 000.00 given by OS to help with the development of sports on the island.

Five of the nine executive members of the committee have tendered their resignations, leaving La Hee in charge of a minority group.

The GOC official be-laboured the point that Olympic Solidarity has nothing to do with the Ministry of Sports and deals directly with the local Olympic Committee.

She explained that all national Olympic associations make applications to IOC for various athletes and that process has nothing to do with the Government of Grenada and its Ministry of Sports.

“What they are saying about setting time and reaching a certain time and certain standard – that is false. Ask them where in the Olympic Solidarity application for support is that written and then we could talk – ask them where?

“… If they could give you the names of the 4 x 400 metre team that was being prepared, we can then talk. There was no 4 x 400 team, there was none. That information they gave you is false.

“I am not saying that money was not received for the preparation of a 4 x 400 metres team but there was none – it never happened. It is shameful for them to do that.

“Ask them to give you the names of the athletes and who was the coach, and where were they training, and if they could send a photograph of them training – they must not do those things” (put out misinformation).

The female GOC official said the utterances from the Ministry of Sports employee were clearly intended to make Felix look bad and labelled the comment as shameful on that person’s part.

She charged that sometimes when one speaks out against these government ministry personnel, they try to find ways “to silence you and to not give you anything.”