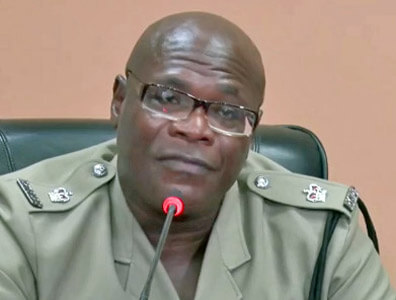 Supt Vannie Curwen: all security measures have been activated for the Christmas holiday period

The Royal Grenada Police Force (RGPF) has finally started the 2022 Yuletide operations amidst what has been termed a “spike in criminal activity” on the island, particularly, the commission of robbery with violence crimes, according to Officer in Charge of Crimes, Superintendent Vannie Curwen.

In updating the nation during a press conference in St. George’s last week Friday Supt Curwen outlined the RGPF’s plans to ensure “effective and efficient, proactive and reactive policing and strategies are implemented throughout Grenada, Carriacou, and Petite Martinique to reduce crimes and disorder during the Yuletide season.”

“We continue to receive calls with respect to services for property crimes generally, traffic accidents, violent assaults, and praedial larceny, while at the same time, keeping our eyes on the trend of illegal firearms and ammunition,” he said.

According to Supt. Curwen, the Police Force also plans to deploy random road stops and surveillance” which he said has become “necessary to curb the issue of crime in the island.”

He said that Grenadians can expect to see “a greater security presence in our towns and Communities, as we (RGPF) heighten our awareness and responses to the challenges that we currently face.”

Lawmen have made breakthroughs in robberies occurring within the last two (2) weeks at MoneyGram within the Foodland Market Square supermarket, as well as at Big Mac shipping agency in Calliste in which a combined sum of over $50, 899.00 were stolen at gunpoint but recovered by the police.

Police investigations are said to be continuing into October’s alleged robbery of $200, 000.00 from a multi-million dollar hotel now under construction at La Sagesse in St David’s.

The most recent high-profile robbery incident occurred last week Tuesday at the S.O.G Supermarket along the Calivingy Main Road, in which an undisclosed sum of cash was taken away by masked armed bandits just before the close of the work day.

Supt. Curwen said that police investigators suspect that these robbery incidents are being executed as part of an organised crime syndicate and called on members of the public who may have information that can lead to the prosecution of the criminals involved to come forward and assist with the investigation.

He disclosed that the RGPF has “activated all security measures” and is “confident in our ability to keep Grenada and Grenadians safe during this period.”

THE NEW TODAY is aware of calls being made by experienced retired crime fighters to offer their services to help combat the recent crime wave in the country if called upon by the authorities.