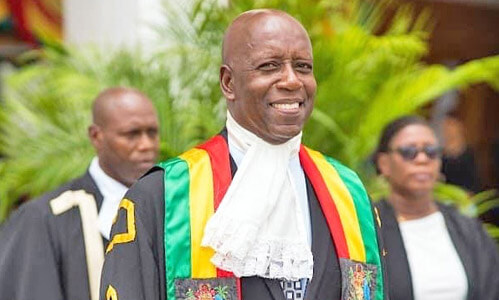 Leo Cato – the newly appointed Speaker of the House of Representatives

Grenada’s new Speaker in the House of Representatives Leo Cato said he is prepared to raise the standard of discussions in the Lower House of Parliament.

The former public officer in the Information Technology (IT) division of the Ministry of Education, spoke with reporters moments after being elected to serve as the country’s ninth House Speaker during the first sitting of the Eleventh Parliament at Parliament Building, Mt. Wheldale last week Wednesday, succeeding former speaker Michael Pierre, who has served in that position since 2013.

“The fundamental role of the Speaker is to ensure that he or she adjudicates fairly, and ensures that the best interest of the people of the nation is served,” Cato said, noting that each “Speaker will be remembered for how he or she conducted the business of the House.”

“And so, I am approaching this new task with a clean slate. I am taking things as they come and will give it my best reasonable judgment…,” he said.

“Having traveled in the field of Education all my life, and Agriculture to a lesser extent, the House of Parliament is really new grounds for me, but I am up to the task, ready to learn, and it is just a call for me to give some more service to this dear land of ours,” he added.

Prime Minister Dickon Mitchell has expressed confidence in the appointment of Cato whose professional background “marries well with the priority areas of our new government,” a Government Information Service (GIS) release quoted him as saying.

Before he was appointed House Speaker, Leo Cato, who holds a Master’s of Science degree in Computer Systems Design from Kingston University and commenced a Doctor of Philosophy (Ph.D.) in Educational Technology at Walden University, is the current Chairman of the Grenada Co-operative Nutmeg Association (GCNA) since 2014 and has also held positions of Manager, Grenada’s ICT Centre for Excellence and Innovation; Director, Call Centres Grenada Ltd., and Advisor to the OECS Technical ICT Advisory Committee.

The House of Representatives is the focal point of parliamentary activity and public attention, where major national and international issues are debated, where Cabinet Ministers defend the policies and conduct of their departments, and where the nation’s business is freely and openly transacted.

The official order of precedence recognises the Speaker’s status by according him sixth place after the Governor General, Prime Minister, Chief Justice, Cabinet Ministers, and President of the Senate.