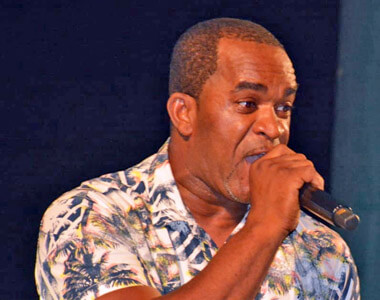 Those were the words of reigning Calypso Monarch Sean ‘Sour Serpent’ Niles in an exclusive interview with THE NEW TODAY on Monday after he witnessed firsthand the performances of the 20 calypsonians that vied for an opportunity to challenge his title during the semi-final round of the Melody Papitette Calypso Monarch competition held Sunday at Progress Park, St. Andrew.

A confident Sour Serpent said that he was impressed by some of the calypsonians but felt that they will have to come real good to defeat him in the finals.

“I am impressed with Big J of course, and Rootsman Kelly as a good showing, however, I don’t believe they have the girth or the cambium to dethrone me at this point in time. If everything goes normal for everybody I am certain that I would retain,” he said.

The reigning Calypso Monarch, who is associated with the Kaiso Bards Calypso Tent, said he is pleased to see more women in the male-dominated competition this year, and commended them on the delivery of their competing songs, stating that “it is good for calypso.”

Sour Serpent also shared the foundation of his defending selections entitled ‘The greenhouse effect’ and ‘Dance in opposition.’

‘The Greenhouse effect,’ captures the growing global concern, which he acknowledged as “one of the most important environmental issues in the last 30 or so years.

“I have taken up that issue, informed the people, and then without notice, I turned it into a piece of political satire to state that we also have the greenhouse effect here, meaning the ‘green house’ effect if you know what I mean because what we are seeing across the world is that leaders are blaming a lot of things from the economic downturn to the increase in diseases on the greenhouse effect (and) of course, the greenhouse effect is a precursor for global warming (and) climate change.”

“ So, if the big world could blame the greenhouse effect for all their woes then I am suggesting that we blame the ‘green house’ effect for our problems here as well.’ Sour Serpent’s second rendition, ‘Dance in opposition,’ surrounds what he described as “the Oppositions’ distaste for coming second (in the general elections) so to speak.

Sour Serpent has knocked on the door of the Calypso Monarch finals for 15 years before finally winning the national title months before the pandemic hit in 2019.

“It has been a real tough road of mixed surfaces, sometimes smooth, sometimes rough but I think the people have already accepted the fact that I would win crowns, and (that) when I start, I am not going to stop,” said the reigning Calypso Monarch, as he shared his journey with THE NEW TODAY.

Sour Serpent, who is also the 2022 Independence Monarch, a title he has won six times, the last four consecutively, said, while he is willing to “take a break from the Independence competition,” the Calypso Monarch title is one he would like to hold on to for a very long time.

“This carnival Calypso Monarch (title), I want to hold on to it until my hands get weary until my head gets sore,” he said.

Rootsman Kelly is one of two former monarchs to earn a place in the finals with his renditions ‘World Song,’ which linked the ongoing pandemic and war on Ukraine, and ‘Poli-Comedian,’ which jokingly capitalises on the behaviour of politicians during the just concluded election campaign.

The other is 7-times Calypso Monarch, Findley ‘Scholar’ Jeffrey, with his compositions entitled ‘Song of resilience,’ which speaks about building a resilient Grenada, and the much talked about ‘6 for 9,’ calypso about the just concluded general elections.

Rootsman Kelly is one of four (4) out of seven (7) contestants who competed from the St. Andrew-based Kaiso Bards Calypso Tent that made it through to the final round of competition.

The other three (3) are Jason “Big J’ Joseph, whose competing songs are entitled, ‘Which weed,’ that speaks about the fight against marijuana in the country, and ‘Dey de love d poor,’ which highlights the treatment meted out to the poor by the former administration, Scholar’s son, Filandi ‘Stunna’ Jeffrey, with ‘Make that make sense,’ which he explained “speaks of things that are happening in Grenada that don’t make sense,” and ‘Booster,’ which highlights several current affairs issues, along with Nevion Cox with his renditions ‘Anything’ and ‘Use your voice.’

In an interview with reporters following his performances, Cox explained the foundation of his selections.

“(The song) ‘Anything,’ was a song that I did for the Independence competition this year. We changed up the words a little bit because we were focusing on a theme for Independence but we just thought it was relevant because so many times there are issues that calypsonians could speak on, and you know (that) they are limiting you as to what you can sing, and what the crowd would like. So ‘Anything’ is a song that says listen, we are moving away from that and just singing on anything,” he said.

Cox who expressed satisfaction with his performance this year went on to say: ‘Use your voice,’ was developed based on what happened to him in the 2019 finals, where “I would have lost a couple of lines at the end of the song, and unfortunately, that put me in last place…so we decided to capitalise on that and came up with the concept of using your voice.”

Veteran Randy ‘Randy Isaac’ Isaac, who also copped a position in the finals with his renditions, ‘I sing this song,’ which paid tribute to cultural heroes, dead and alive, and ‘Charity begins at home,’ which calls for Grenada to be given the same treatment and allegiance as given to the international community, along with Scholar, were the only two (2) calypsonians in competition from the Kaiso Fireworks Calypso Tent, which was launched in Grenville, St. Andrew, in collaboration with Kaiso Bards Calypso Tent in 2019.

Finalist Jerry ‘Papa Jerry’ Baptiste, is one (1) of two (2) contestants from the Kingdom Calypso Tent out of St. David’s, also moving on to the next round of competition with renditions entitled: ‘The role,’ which he said tells “the leaders when you become Prime Minister and people of power, you should treat the people that elected you with honour and respect,” and ‘Forgiveness,’ which is “about the age-old adage that whenever you do wrong things go on your knees and ask the Almighty to forgive you. So, basically, I just compiled some stories together, and allow your imagination to run wild,” he remarked.

The other Kingdom Calypso Tent contestant is Germaine ‘Superstar’ Simon with her renditions, ‘Selfish Democracy’ and ‘Nation to heal,’ who along with Samantha ‘Royalty’ Dickson from the North-West Brigade Calypso Tent, are the only two (2) out of four (4) female contestants to receive the nod from the judging booth.

Royalty said that she is “excited to be among the finalists” with her renditions ‘Morals and standards,’ which makes a comparison between ‘the youth back then and now,’ and ‘We can’t give up,’ which is a song that she wrote during the pandemic.

Also hailing from the North-West Brigade is Micah ‘Baracka’ Joseph with his renditions “Ah doh know,’ and “The future is now.”

In an interview with reporters after his performance, Baracka said, ‘Ah doh know’ is about not knowing when would be the last time or how much time you have left on this earth, which is a song he dedicated to his father who recently passed away, while ‘The future is now,” captures the reality that the future is now.

The Calypso finals, also called the Dimanche Gras competition, returns this year after a 2-year hiatus due to the pandemic with a change in the date and venue.

The national competition, which is usually held on Carnival Sunday at the National Stadium in St. George’s, has been moved to August 4 at Progress Park to capitalise on generating a greater level of participation from calypso lovers, who are said to be more in numbers on the eastern side of the country.