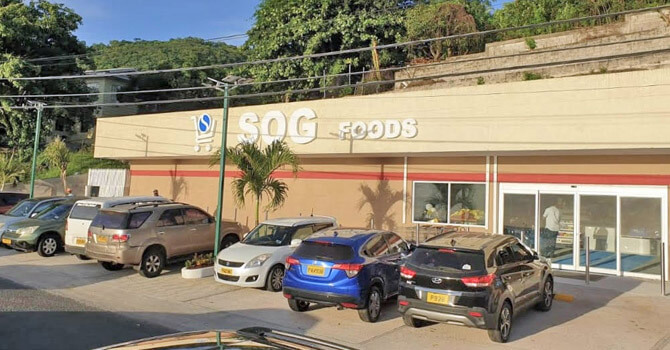 Almost six (6) years after the December 2016, opening of its first supermarket in Calivigny, St. George’s, SOG Foods Inc., has expanded its operations with the opening of a second outlet at Grand Mal in the St George North-west constituency.

Last week Friday saw the blessing of SOG Foods Inc., new outlet by Roman Catholic Bishop Clyde Harvey to mark another significant milestone for the company, which operates under the tagline: “A source of good foods.”

Recognising the need for the flexible, and convenient shopping option in the community, Businessman and Owner of SOG Food’s Ltd., Otis Gay, who grew up in the area, seized the opportunity to introduce the much-needed service to residents in Grand Mal, and surrounding areas, including, Fontenoy, Molinere, Mt. Moritz, Happy Hill, and the wider neighbourhood.

Like the Calivigny outlet, the one at Grand Mal offers a clean, spacious, customer-oriented environment for shopping, inclusive of free parking facilities.

With opening hours from 7 a.m. to 11 p.m. daily, including on public holidays, both outlets offer a wide array of quality and affordable products including but not limited to groceries, household, hardware, kitchen appliances, baby and pet supplies, liquors, business equipment, toys, recreational items, local meats and fish, fruits and vegetables.

The Grand Mal community is part of the St. George North-west constituency, which has for the last 38 years been under the stewardship of former Prime Minister, and current Opposition Leader Dr. Keith Mitchell, whose New National Party (NNP) administration was voted out of office three (3) months ago.

Dr. Mitchell was represented at last week Friday’s ceremony by Opposition Senator Neilon Franklyn, who as a resident himself acknowledged the need for the service, and commended the managers and developers of the SOG brand for “taking that bold step to enter the market of St. George North west.”

The ceremony was also attended by Minister for Health, Wellness, and Religious Affairs, Senator Gayton La Crette, who welcomed the long-awaited initiative, which will employ over 20 persons, and a ready market for farmers and livestock producers.

Stating that the initiative “encourages independence, and adds character to the community,” Sen. La Crette expressed optimism that it will also serve as encouragement for others to be as bold in their undertakings in the various business streams, to create further employment within the community.