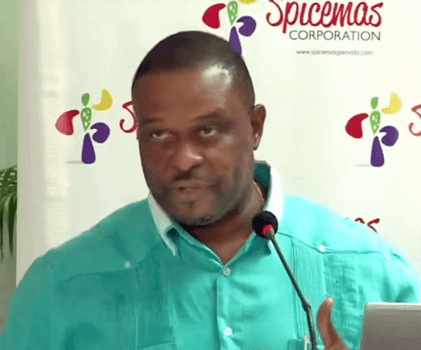 In preparation for Carnival, we at the SMC (Spicemas Corporation) have already embarked on a vaccination campaign where we ask soca artistes, calypsonians, people in the fancy bands, traditional bands, pan-men and women, people who play jab, vendors, and other local influencers to encourage persons to vaccinate.

Those were the words of SMC Chairman Arley Gill, as he detailed the plans for a successful Carnival 2022 in August.

Speaking to reporters in St. George during the media launch of “D return…A celebration of life,” in St. George on Monday, Ambassador Gill said that the anticipated success will depend heavily on the vaccination status of enthusiasts as he outlined plans for the official return of the premier cultural event from August 8-9 after a 2-year hiatus due to the coronavirus pandemic.

He said “it is important for us to have Carnival in 2022 to preserve, protect, and preserve the Spicemas brand” as a means to stimulate economic activity in the country.

He stated that “vaccination is important for us” as it “gives us a stronger bargaining power to open up the Carnival, loosen up the restrictions”.

“If more people are vaccinated…it creates a safer environment…our policy with regards to establishing bubbles for the carnival is that everyone entering the venue must be vaccinated, not just patrons, the sound system people, production people, vendors, the competitors, judges, police officers – that is what we are asking…you have your vaccination card, bingo, you in the show…,” he said.

“…So, calypsonians, soca artistes you know, to enter our competitions, as of now you must be vaccinated, and you have adequate notice…you have enough time to vaccinate, and that is why we sort of push the button hard, and early, so that we (can) come to the nation, and give persons sufficient time to prepare,” he added.

Most Grenadians have been reluctant to take the COVID-19 vaccine with the latest COVID-19 update, which was released by the Ministry of Health on February 27, showing a record of 37, 504 (33.2%) fully vaccinated individuals, while 5, 501 (4.9%) have been partially vaccinated since the Keith Mitchell government’s vaccination campaign commenced in February last year.

“We know the challenge and we are not deaf to the low vaccination rate. We know the reality because we are doing other things,” said Gill, hinting at vaccination challenges with regards to ongoing preparations to stage a min-carnival extravaganza event, when Grenada welcomes international cricket back to the National Stadium for the Test Cricket Match between England and West Indies later this month.

“…We are experiencing difficulties in terms of getting traditional mas players with their Short Knee, Vieux Corps, and so on to vaccinate…but we believe that the national policy of vaccination at the end of the day holds through for all of us with regards to our activities,” he said.

Several changes to the structure of this year’s festivities were announced, including a reshuffle of the days that the various competitions are traditionally held and all in-person events will be held in a bubble with only fully vaccinated participants.

The finals of the Calypso competition, which is usually held on Dimanche Gras night, and usually climaxes into Carnival Monday, will be moved from the National Stadium to Progress Park in St. Andrew, and is down to take place on Majestic Thursday, replacing the national Queen Show event, which will be held about (2) weeks earlier on July 27.

A shortened route for Monday night mas, and the parade of the bands was also announced and SMC is proposing the use of “the Tanteen/Old Trafford – Burns Point – Port Highway – Reno -Tanteen ring road” route, which Gill said is seen as an area that affords “the security forces control in terms of blocking off the roads and so forth.”

Although the SMC Chairman said there would be “no mas’ band competitions this year,” he explained that the parade will climate at the Tanteen playing field on Carnival Tuesday, where a stage will be erected for the displaying of the bands, that are expected to produce one (1) section using a theme that will be provided by the GMBA.

Ambassador Gill announced that the process of subventions is ready and will commence immediately, with the payout set to begin by this month-end.

He also spoke of a scaled-down approach to the highly anticipated J’ouvert event, which will be held on Carnival Monday only this year, and is the only event on the SMC’s Spicemas’ 2022 calendar that will not be held in a COVID-19 bubble.

“We don’t think it’s possible to do J’ouvert in a bubble and put jab in a bubble,” he told reporters as he outlined plans to decentralise the event at the parish level this year and to have it climaxed earlier to give revelers more time to enjoy themselves in the mas’ band parade, which is due to begin at 10 a.m.

It is also “open season for private promoters,” said Gill, who issued an invitation for them to apply to SMC to obtain licenses to hold fetes.

However, alluding to the SMC’s vaccination policy, Gill highlighted the need for those wishing to stage private events to “work with the police and the Ministry of Health in the COVID-19 environment…with regards to the protocols that have been established.”

The SMC Chairman disclosed that “all our shows are to be held in a mixture of pay per view, and in-person” with the maximum capacity for venues to be determined by the Ministry of Health, and the Royal Grenada Police Force (RGPF) to facilitate and encourage social distancing.

The plans were arrived at following extensive consultations with members of the local community, including religious leaders, political parties, and other stakeholders.

The SMC Chairman gave assurance that as “we continue to monitor the COVID situation with the Ministry of Health…if the situation continues to improve, and there is a no real risk or a surge we will go back to the Cabinet, and seek the removal of all the restrictions.”