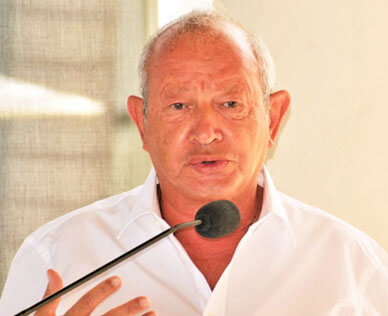 Sawiris, the owner of the high-end Silver Sands Resort on Grand Anse Beach, said Wednesday that the Maurice Bishop International Airport (MBIA) will be better managed in private hands.

He made the comments during a groundbreaking event for his second hotel development, the thirty-room Beach House by Silver Sands, at the site of the former Beach House Restaurant.

Addressing his comments to Prime Minister Mitchell who attended the ground breaking ceremony, Sawiris said, “Privatise the airport. Give it to the private sector. I think they can do a better job”.

MBIA has fallen on hard times since the coronavirus pandemic forced a shutdown of the country and continued limited air travel as a result of the virus march across the globe.

There have been reports that the airport has seen a significant drop in revenue of more than $25 million.

The Mitchell-led Administration has been forced to pump EC$1 million each month to keep the airport in operation.

According to Civil Aviation Minister Clarice Modeste-Curwen, the upgrade is needed to make Grenada more competitive in international air travel when the industry is known to be badly affected by Colvid-19.

The mix of a powerful property owner’s lobby and the dire financial straits of the airport could make privatisation of one of the State’s single largest assets, attractive to the cash-strapped Mitchell Administration.

Sawiris went on to say that in private hands airport services will improve.

“I think it is not a bad idea. If we do that (privatise the international airport) we can improve a lot of services, improve the catering,” said the Egyptian billionaire.

Sawiris, who first came to Grenada in 2013 for a one day visit, is now the owner of at least six different prime locations in keeping with his stated intention almost eight years ago to buy up distressed and abandoned hotel properties in Grenada.

Now he owns the massive Port Louis in Lagoon Road, Mt Cinnamon in Morne Rouge, two properties along the world famous Grand Anse Beach, including Silver Sands Resort, the current development at Point Salines close to the International airport, and is also in the process of completing the purchase of Tufton Hall in rural St Mark.

Sawiris is also known to be interested in purchasing all the properties on the Grand Anse beach that are in close proximity to Silver Sands.

He also announced Wednesday that he is in talks with Chinese interests for the further development of Port Louis, including the building of a hotel.

Sawiris did not say if he was directly interested in doing a deal with the government to take over the international airport but if that happens he could become the most powerful person in the country given the enormous amount of real estate he has already acquired.

Tourism and Civil Aviation Minister, Dr. Clarice Modeste-Curwen, responding to Sawaris’ advice to privatise the airport commented that his efforts to develop tourism and travel in Grenada could leave the job of Minister for Tourism vacant.