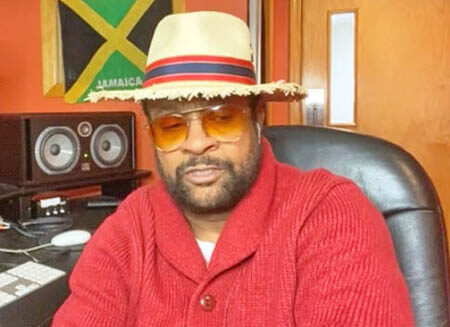 The thing I want people to take from the album is joy…obviously, it’s going to be a different Christmas with tons of restrictions (and) curfews and you probably wouldn’t be able to have large gatherings and all of that; so, if the music can add joy to Christmas for you and your family (and) actually lighten people’s mood and put them in a better place, then my job is done.

Those were the words of multi-Grammy award winner Orville Richard Burrell, better known as “Shaggy,” in an exclusive virtual newspaper interview with THE NEW TODAY on Monday, held in collaboration with Grenada’s Chrislyn ‘Msy. Chrissy’ Lashington of Lashington Agency.

Speaking from New York, the 52-year old entertainer shared his expectations for his newly released 15-track, ‘Christmas in the Islands’ album, noting that these covidious times “has been really rough on everybody so far, especially children.”

“And, I just thought that during the holiday season, we certainly should try and not let COVID dictate our holiday spirit,” added the reggae sensation, who referenced the stresses he has observed in his own children adapting to “focus on the tablets to learn.”

Shaggy described the 15-song compilation as “like a roller coaster ride,” (that no matter the) type of mood you are in, that song is supposed to fill.”

According to the artiste, each song tells a different story.”

The global reggae/dancehall & pop music icon, who hails from Kingston, Jamaica, dropped his 2020 Christmas album worldwide via the Germany-based BMG on November 20 and is also planning to spread Christmas cheer, via a simultaneous broadcast of a “pre-recorded Caribbean styled Christmas Special,” to be aired across the islands on Christmas night.

Locally, the Grenada Broadcasting Network (GBN), has been given exclusive broadcasting rights for the Shaggy event, scheduled to be aired at 9.00 pm.

He went on: “So, I decided to record a Christmas special explaining the culture the food, the vibe and hopefully it would be aired on Christmas night at about 9.00 p.m. on both television stations out of Jamaica and Caribbean affiliates, including Grenada.

“…We are very excited about that,” Shaggy remarked, as he reflected on his childhood growing up in Jamaica’s capital city.

His new Christmas album comprises new and original music, as well as a modern reggae cover of the classic ‘Have yourself a merry little Christmas,’ among other holiday favorites.

Shaggy said the album has received “a lot of positive feedback,” since its November release.

“A lot of the reviews have been very, very good. I don’t think I have heard a bad review,” he added.

The idea for the album was born in 2019, when Shaggy collaborated with English Musician, Sting, to infuse a reggae twist on traditional Christmas songs like Silent Night (Christmas is coming), Jingle Bell Rock and Feliz Navidad.

The artiste said: “It really started after we did the Disney Christmas special, myself and Sting…and him (Sting) and I had this conversation, maybe, it would be cool if we did a Christmas album (and) at the start of the year, when I was finishing my tour.

I started to work on some melodies here and there and I played them for him and all of that and he was like, let us link up and get it done but then COVID hit… he got stuck in the UK and I was stuck in New York and when I finally came to Jamaica, I was stuck in Jamaica; so, it was pretty clear by then that it was going to be a Shaggy album”.

“So, I just started writing some songs and I got in touch with some of my friends (and) I asked them (to come on board) and they jump on it and they were kind enough to come on and give me their talent and it was amazing,” he added.

As the only diamond-selling dancehall/reggae artist in history, Shaggy has sold more than 40 million album units to date and has amassed over 1.5 Billion streams worldwide throughout his illustrious career.

Shaggy has been nominated for seven Grammy Awards, winning twice for “Best Reggae Album” with Boombastic (1996) and most recently”44/876″ with music icon, Sting (2019).

The top reggae entertainer is managed by The Cherrytree Music Company and is among the top three streamed reggae artists of all time on Spotify, along with Bob Marley and Sean Paul.

His latest viral sensation, “Banana” with Conkarah, has over 1 billion streams worldwide.

It has been four consecutive decades that Shaggy has had a massive hit and while his musical accomplishments speak for themselves, a couple of lesser-known facts is his altruistic endeavours, which includes the establishment of the Shaggy & Friends Foundation, which benefits the Bustamante Children’s Hospital in his home town Kingston.

Shaggy has also served in the US Marines for four years, 1988 – 1991 (including two tours of duty in the Middle East as part of Operation Desert Storm), before pursuing his music career in 1992.

He released his first hit “Oh Carolina in 1993, a dancehall re-make of a ska hit by the Folkes Brother, which appeared in the film, Silver.