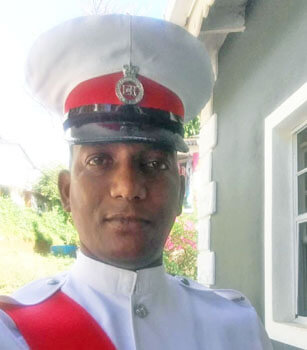 Sergeant Adrian Panchoo who was struck in the head on Friday night by a known figure inside the 4-Roads drug-infested community has not ruled out the possibility of filing a civil case against the culprit.

“It is something that I’m considering,” the police officer who is attached to the fire Department on the Carenage told THE NEW TODAY.

Sgt. Panchoo visited the Criminal Investigation Department (CID) of the Royal Grenada Police Force (RGPF) on Monday to give a statement about the incident in which he received five stitches to the head.

The wife of the police officer who witnessed the incident including the assault on her husband also gave a statement to the police investigators.

The Officer who is attached to the Fire Dept was passing through the city when he noticed a fight taking place between two men and he decided to stop the vehicle to try and bring peace.

He said he noticed that one person was on the ground and another was over him.

“I pulled out the person who was on top,” he added.

Within seconds, some persons rushed down from 4-Roads and got involved in the fracas by starting to pelt bottles.

“To be honest, I didn’t see them (the guys from 4-Roads) when I stopped. I was just driving home with my family in the vehicle and that is exactly what happened,” he said.

“It wasn’t like if there was a gang of guys there when I stopped – it was only two persons engaged in an altercation – and before I knew it the guys rushed down on me,” he added.

According to well-placed sources, one of the persons involved in the fight was known to be associated with 4-Roads and the other is from the Birchgrove, St Andrew area.

There are reports that the two had a confrontation some months back in Adelphi in Birchgrove and it spilled over on Friday night when the man from outer city was spotted drinking at a bar in town.

Sgt. Panchoo said the person who struck him in the head came from behind him to do the act.

He said: “I looked back and I saw the person directly behind me so I rushed behind that person without realising that I was injured. I grabbed onto him but by the time I grabbed onto him the guys had surrounded me and I realised that I was bleeding so thinking of my personal safety I decided the best thing was to release him.”

Sgt. Panchoo is confident that he was able to make out the face of the person who struck him in the area of the head and also some of the elements from 4-Roads who took part in the incident.

The police investigators are also said to be reviewing some CCTV footage in the area where the incident took place in the vicinity of Hankey’s Computer store on Grenville Street in the city.

Police have already charged one man, 38-year old Gordwin John of Grenville Street in St. George for the offence of Wounding a Sergeant of Police attached to the Fire Department.

An injured Sgt. Panchoo was taken to the St George’s General Hospital after the incident but was released after five stitches were inserted into an area of his head.

4-Roads is a small area in Upper Grenville Street in the Town of St George constituency and is considered a stronghold of the current Member of Parliament, Peter David.

Several sections of the area within Four Roads have built up a reputation over the years as a haven for illegal activities especially drug peddling and gambling.

Residents have become incensed with the failure of the Royal Grenada Police Force (RGPF) over the years to crack down on the illegal activities there due to the connection between “The Don Men” who control “the turf” due to their connections with the Political Directorate.

THE NEW TODAY was told that some of the known “troublemakers” engaged in the illicit business on Four Roads are related to a member of the Police High Command.