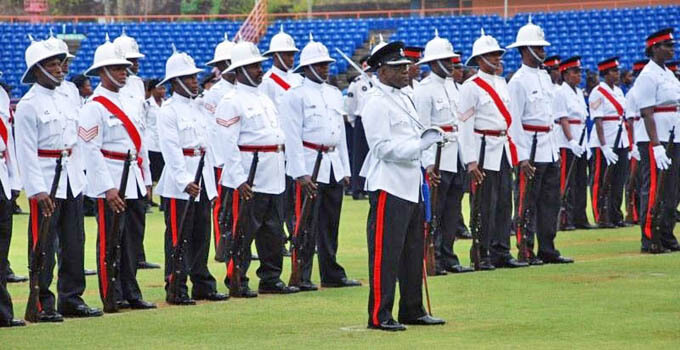 A parade involving members of the police force

In the face of allegations of sexual abuse and harassment of female police officers by high-ranking members of the Royal Grenada Police Force (RGPF), THE NEW TODAY has seen a document which seeks to address the issue within the island’s major security outfit.

The document addresses the steps to be followed by female officers who are being pressured for sex by members of the force including those who fall under the jurisdiction of the Public Service commission (PSC) from Inspector and upwards.

There have been several reports coming out of the police force in the past month pointing at sexual harassment of female officers by at least eight to ten most senior officers within RGPF.

Some of the allegations include the immediate transfer of those female police officers who resist the attempt by the sex predators within the police force.

“Any person found to have sexually harassed another will face disciplinary action up to and including dismissal from employment,” the document said.

As a public service, THE NEW TODAY reproduces the policy document that seeks to address the vexing problem of sexual harassment within RGPF:

The Royal Grenada Police Force (RGPF) is committed to providing a safe environment for all its employees free from discrimination on any ground and from harassment at work including sexual harassment.

This policy will be applied consistently throughout the RGPF. All complaints of sexual harassment will be taken seriously and treated with respect and in confidence. No one will be victimised for making a complaint.

Any person found to have sexually harassed another will face disciplinary action up to and including dismissal from employment.

DEFINITION OF SEXUAL HARASSMENT
A.Sexual harassment is unwelcome conduct of a sexual nature which makes a person feel offended, humiliated and/or intimidated. It includes situations where a person is asked to engage in sexual activity as a condition of that person’s employment, as well as situations which create an environment which is hostile, intimidating or humiliating for the recipient.

iii. The use of job-related threats or rewards to solicit sexual favours

i. Comments on a worker’s appearance, age, private life, etc.

v. Insults based on the sex of the employee

vii. Sending sexually explicit messages by phone or by email.

i. Display of sexually explicit or suggestive material

A. Anyone can be a victim of sexual harassment, regardless of their sex and of the sex of the harasser. The RGPF recognises that sexual harassment may also occur between people of the same sex. Of importance is that the sexual conduct is unwanted and unwelcome by the person against whom the conduct is directed.

B. This policy provides protection for all members of staff including established employees, recruits, rural constables, civilian staff and trainees. It also extends to persons, such as complainants of crimes and other reports, who through RGPF related business come into contact with and are affected by sexual harassment conduct of RGPF staff.

C. All sexual harassment is prohibited whether it takes place within the premises of the RGPF or outside, including at social events, business trips, training sessions or conferences arranged by or through the RGPF.

D. The RGPF recognises that sexual harassment can be a manifestation of power relationships and often occurs within unequal relationships in the workplace, for example between supervisors and subordinates, it is also perpetrated by individuals of lesser or equal authority. Any member of staff who sexually harasses another or persons who conduct business with the RGPF will be subject to this policy.

A. Sexual harassment can be perpetrated through a wide range of behaviours including acts categorised as sexual offences by Grenada’s Criminal Code. This policy therefore provides informal, formal and criminal complaint mechanisms to provide adequate and appropriate options to complainants.

B. Initial Actions: Anyone who is subject to sexual harassment should:

Immediately inform the alleged harasser that the conduct is unwanted and unwelcomed.

a. The RGPF recognises that where a power dynamic exists between the parties it may not be possible for victims to inform the alleged harasser. If a victim cannot directly approach an alleged harasser, he/she can approach a supervisor for assistance.

3. Report the incident immediately to the Department/Division head. If that individual is responsible for the harassment, report the conduct to the Assistant Commissioner in charge of Human Resources.

C. Responsibility of Officer Receiving Complaint: When a member of staff receives a complaint of sexual harassment, he/she will:

5.Ensure that the complainant knows that he/she can lodge the complaint through other available mechanisms if desired;

6.Keep a confidential record of all discussions;

7. Respect the decisions of the complainant.

D. Informal Complaints Mechanism: If the complainant wishes to deal with the matter informally, the designated person will:

a. Interview the complainant and the alleged harasser separately

c. Produce and present a report to the A.C.P i/c of Human resources detailing the investigations and any recommendations

G. Other Measures: Throughout the complaints procedure, a complainant is entitled to be referred to and helped by a counselor of or provided by the RGPF. The RGPF will nominate members of staff and provide them with special training to enable them to assist victims of sexual harassment.

A. Anyone who has been found to have sexually harassed another person will be subject to punishment prescribed by the Police Act, including:

A. The RGPF will ensure that this policy is widely disseminated to all relevant persons.

B. All new employees will be trained on the content of this policy as part of their induction into the organisation. It is the responsibility of every station/department supervisor to ensure that every member of staff is aware of the policy to conduct refresher lectures on the policy every year.

A. The RGPF recognises the importance of monitoring this sexual harassment policy and will ensure that it anonymously collects statistics and data as to how it is used and whether or not it is effective.

B. Supervisors, managers and those responsible for dealing with sexual harassment cases will report, on compliance with this policy, to the A.C.P in charge of Human Resources and include the number of incidents, how they were dealt with, and any recommendations made. This will be done on a yearly basis.

C. Complainants are encouraged to provide feedback on the effectiveness of this policy and its processes.

D. The organisation will use the information collected to evaluate the effectiveness of this policy and make any changes needed.