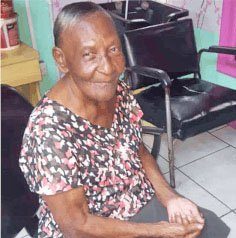 Police have confirmed that smoke inhalation from a fire that gutted the home of Shereen Stroude on Willamson Road, has resulted in the death of 92-year-old Vita Paul Joseph, who resided in the Four Roads area on Grenville Street in St. George’s.

“Currently the investigation is ongoing into the matter and that is the most I can say at this time,” said Officer in Charge of the Criminal Investigation Department (CID), Superintendent Dunbar, who made the disclosure in response to a question posed at a press conference at Police Headquarters last week Wednesday.

The fire displaced a family of nine, who lost everything to the blaze.

Although the fire response team was able to get within the vicinity of the fire within minutes, Acting Police Commissioner Edvin Martin said that “the fire tanks were delayed (in actually attending to the fire) by a few minutes due to parked vehicles which obstructed the path of the appliance.”

92-year-old Joseph was the occupant of one of the houses that was partially affected by the fire. She was rushed to the St. George’s General Hospital where she was later pronounced dead.

According to Supt. Dunbar, autopsy results confirmed that the elderly woman died as a result of asphyxia, which is a condition arising when the body is deprived of oxygen, causing unconsciousness or death by suffocation.

Police Commissioner Martin told reporters it is possible that charges could be laid in this case depending on what is revealed in the investigation.

“The investigation would have to reveal some form of liability that someone committed a crime that led to her death,” he said.

A release from the Community Relations Department (CRD) of the Royal Grenada Police Force (RGPF) said the fire at Williamson Road left two houses completely destroyed, another with partial damages and one other with heat damages.

It was one of two house fires on the same day in St. George’s.

Earlier in the day, retired Permanent Secretary in Health, Eunice Sandy David, who is now the Acting Administrative Officer at the Integrity Commission, lost the remainder of her belongings into what sources said was the second fire to take place at her residence in Moliniere within the last two months.

Sandy-David was said to be preparing to commence repairs on her home and to reoccupy the second floor of the two-storey building, which is now completely damaged by the fire.

Police have said that no one has been detained for questioning in connection with the fire.