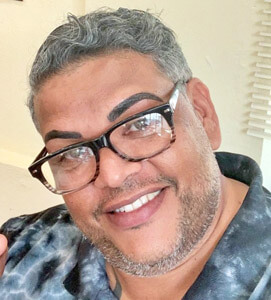 Former SMC CEO Kirk Seetahal : the swimsuit segment is not the issue at hand

Former Chief Executive Officer (CEO) of the Spicemas Corporation (SMC) Kirk Seetahal has cited the need for a national discussion to address challenges in the selection of candidates to contest the annual National Carnival Queen Show competition.

Seetahal, who served as a member of the 2022 National Carnival Queen Show Committee chaired by Lexan Fletcher, expressed this view in an exclusive interview with THE NEW TODAY on Tuesday, contending that there is a “national crisis among the youth,” some, who although graduating from secondary and tertiary institutions, “cannot carry on a conversation or answer simple questions.”

“This,” he said, “is the real issue at hand,” when asked to share his view on a debate in some quarters that the National Carnival Queen Show, which should “be about Carnival,” emphasing “big costumes, evening wear, and the spirit of Carnival, has been turning into more of a Miss Grenada show, a Miss Universe kind of pageant.”

Ricardo Keens-Douglas, who had the opportunity to produce the National Carnival Queen Show back in the 1990s, shared this view on a local radio programme following the recent staging of this year’s competition, which saw 26-year-old Secondary School Teacher Ressa Mc Intosh being crowned Miss Grenada, after two (2) years of no Carnival due to the pandemic.

Mc Intosh went on to represent Grenada at the just concluded Miss OECS 2022 pageant finishing as the Second Runner Up, and capturing the titles for best promotional video, talent, interview, and Ms. Congeniality.

“My point is get rid of that (swimwear segment) and have a Miss Grenada Show for Ms. Universe or whatever (other competition) it is, and have a Carnival Show where anybody can enter,” he suggested.

“That’s my view on it but I guess they are cutting costs or whatever it is, so, they want to put everything into one bowl, and try to get a Miss Universe for other competitions but I believe that Carnival Queen Show should be about Carnival, and it should focus on big costumes, and evening wear, and the spirit of carnival…what I did in 1993, they were just bringing in the talent (segment) so, I dropped the bathing suit (segment), and, I only had the costume evening wear and interview,” Keens-Douglas remarked.

However, Seetahal, who has been involved in pageantry for well over two (2) decades, noted that the swimsuit category was added to the National Carnival Queen Show competition in the 1990s as the winner has had to compete in swimwear when representing the country as an ambassador at external beauty pageants.

“So, you want to make sure they are versed there as well,” he explained, noting that it is the norm in “all the Caribbean countries except for Trinidad and Tobago,” that the National Carnival Queen will go on to represent the country externally.

He contended that the swimwear segment “is about physical fitness (and) does not take out from the fact that the biggest set of points in that competition is for Carnival costume.”

“The focus has always been on that…the swimsuit segment has nothing to do with the quality of the Carnival Queen Show, he added, pointing out that “in the past couple of years the “Queen Show has generated the biggest crowds it has ever had.”

“Normally (for) Queen Show we would see three to four hundred people in the stadium because it had lost its element and what has happened is there has been a revamp with the show selling out,” he said.

Seetahal attributed this feat to the “venue change” from the Grenada National Stadium to the Spice Basket (in) the last couple of years.”

Noting that “even our appetites as consumers are different in this world of technology,” Seetahal stated that “in the past, when we didn’t have advanced technology, we loved to go to the stadium, and sit down, and even if we are far away (from the stage), we good but not now…”

“We want to be engaged, and watch it closer…” he said, while stressing that the event “has improved over the years,” and contended that the “swimsuit (segment) is not the issue at hand.”

“The real issue at hand is finding quality girls…all-rounded young women who could converse, carry on a conversation, and be a proper representative for your country,” Seetahal remarked.

“The crisis is not the swimsuit, and costume” but in the “quality of girls that are being selected,” and that this “crisis is simply sweeping our youth, and we are not paying attention to it, that an average young person male or female coming out of secondary school with 12 and 13 subjects when they only need five (5) to go to university, some of them with associate degrees, who cannot carry on a conversation, answer simple questions, or tell you about themselves.”

“There is a national crisis happening secretly among the youth that we are not paying attention to, where the youth don’t know who they are, and I am not just talking about the pageant side of it – there is a crisis of education (and) sense of purpose that seems to have left, and, if that is happening with the young girls, what is happening with the young guys, the future generation of fathers? It goes further than the young women who take part in the queen show because people who cannot converse or communicate cannot solve a conflict.”

“Why do you think there are so many things (violence) happening because there is a crisis, a secret crisis that technology as good as it is, has brought into the fold…We no longer sit down on the block and beat ole talk, we sit down on our phones. Young people nowadays, don’t read your newspaper, they don’t watch the news on T.V. So, they don’t even know what is going on in the region…So, there is a crisis of what young people are paying attention to,” he said.

“So, the selection process is what is critical for me because regardless of what they are, an ambassador for their country, and they should be able to have some sort of intellect, be able to converse and carry on a conversation, and eat with (and) a knife and fork,” added Seetahal, who is also of the view that the screening process should start early in the year in an effort to find the right delegate at the parish level.

According to Seetahal, “the top three (3) winners (at the end of the competition) could get an opportunity to represent the country in different shows,” as they become available “once it suits them.”

“Noting that the intention is to win, and represent your country,” he explained that “if a (particular) show is not suited for maybe the (Carnival) Queen, it might be suited for the Second Runner Up or the First Runner Up.”

However, Seetahal said, so far, “Spicemas has not received invitations to any other shows” apart from the Miss OECS competition.