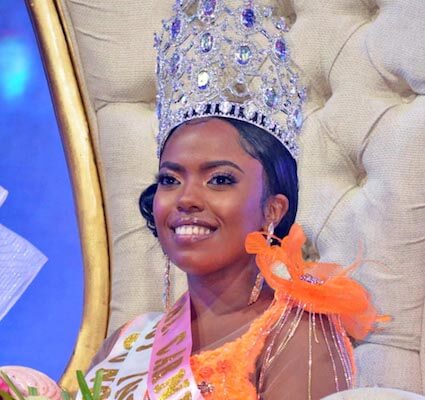 2022 Carnival Queen Reesa McIntosh - Ms. St. George plans to use her reign to push education in the creative arts

The last time the Spicemas Corporation (SMC) organised a national Carnival Queen Show, the title went to the Capital parish of St. George was in 2018, when Kemik De Gale walked away with the Crown, which she handed over to Ms Odessa Merryman of St. Mark in 2019.

Merryman, who was the first national queen to be crowned from the small rural parish in decades, goes down in history as the longest serving Carnival Queen (2019 – 2022), due to the ongoing coronavirus pandemic, which had put a hold on all activities for the last two years.

After making her final walk on Majestic Wednesday, the 2019 Carnival Queen proudly handed over the crown to 26-year-old Reesa McIntosh, Ms. St. George, who was the judge’s pick among the seven (7) competing young women after witnessing their performances in seven (7) rounds of competition.

McIntosh, who hails from the village of Tempe, also walked away with the Devon Francique Ms. Congeniality award, and titles for Best Interview and talent, and will go on to represent the tri-island state as Ms. Grenada, at the Upcoming Organisation of Eastern Caribbean States (OECS) Pageant in Dominica.

The newly crowned national queen currently teaches Spanish, French and Religious Affairs at the St. Joseph’s Convent, St. George’s, and was the 2013 winner of the GBN Gospel Challenge competition.

“I hope that during my reign I can use my platform to push education, creative arts and especially I want to encourage all the youths that whatever they are good at, whether it be technical skills, talent, go for it with confidence, and that what they have to offer, though small in their minds, it can have a big effect on Grenada,” she told reporters backstage after being crowned the 2022 Carnival Queen.

Ms. St. Mark, Junisha Hosten, who was the 1st Runner Up, captivated the crowd when she graced the stage in a colourful stilts during the Carnival Costume segment, to win the title for Best Carnival Costume this year.

Describing the journey as challenging but satisfying at the end, Hosten encouraged “other young girls to embrace the opportunity to have that [Queen contestant] experience because it taught her a lot – time management, love for self, how to be positive and have a positive impact on others.”

Although she would have liked to have won this year’s title, Ms. St. David told reporters that she is “more than happy with the results,” and now looks forward to continuing her education at the University of the West Indies (UWI).

She urged young women to be confident in who they are and their abilities.

“You are beautiful (in) your own skin and you can do anything you put your mind to once you have to work hard for it, focus on the objective and not the obstacle,” she advised.

Notably, for the first time in years, the show started on time at the Spice Basket in Beaulieu St. George, which was filled beyond its capacity.

Chief Executive Officer (CEO) of the Spicemas Corporation Kelvin Jacob, who spoke with reporters after the show, confirmed that they were forced to turn away patrons at the door, as all tickets were sold out and cited a need to secure a bigger venue for the event which has shown promising signs of growth this year.

“It was very disappointing to be turning people back from a Queen show, actually the return of Spicemas, but we had no choice because of the venue – to limit the amount of people coming inside,” he explained.

“…We had a lot of people standing at the back so, it was a little uncomfortable for some; we do apologise, and I guess going forward we would have to look for a bigger venue if Queen Show continues to be another big event like this, ” said the SMC CEO.