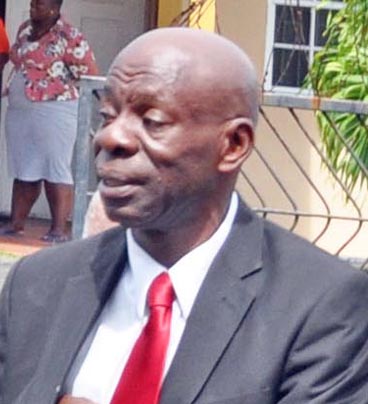 Cletus St. Paul – is facing another accusation of sexual assault

The Testimony of Victim Number Two

Grenada police are building a second powerful case of sexual assault and molestation against Cletus St. Paul, the once feared and powerful member of the elaborate Security Detail around Prime Minister Dr. Keith Mitchell.

A senior lawyer confirmed to THE NEW TODAY that his client who is from the western side of the island has formally given a statement to the Criminal Investigation Department (CID) of the Royal Grenada Police Force (RGPF) on the latest allegation involving St. Paul.

Two weeks ago, the 63-year old top bodyguard was slapped with four sex-related charges arising from an incident involving a 33-year old woman who was referred to him by Prime Minister Mitchell after the person approached him for housing assistance from the State.

THE NEW TODAY was told that the statement was given Monday by the latest female to have come forward and was directed to go into the CID main office on Green Street, St. George’s.

According to the lawyer, there had been contact prior to the coronavirus pandemic in March between his client and the Office of the Director of Public Prosecutions (DPP) and that the discussions continued within the past week.

This newspaper understands that in the initial contact, a member of the CID team had already met with the woman and was making preparations to take a statement from her concerning the alleged sexual assault by St. Paul just before COVID-19.

According to well-placed sources, there were two acts of alleged sexual molestation by St. Paul against the latest victim.

The source said that the first initial contact the woman had with the top security official was a night when she went to a village shop to buy groceries and on her way back home St. Paul stopped to give her a ride in his vehicle.

He stated that the woman was hesitant at first to enter the vehicle since she did not know the male driver but decided to take the ride out of fear that she had to pass through an area that had no street light and was very dark.

He spoke of St. Paul driving the vehicle in close proximity to where the woman lived and pulled up on the side of the road.

The top security official engaged her in a conversation in which he offered to help her with government building material if she ever needed assistance along those lines.

“I tell him thanks for the ride and ‘good night’ and before I turn to go out of the vehicle, he grabbed me by my shoulder and stuck his tongue in my mouth just like that. I just pulled away myself and I went out (the vehicle). I was wondering what kind of person he is – you meet someone for the first time and you (are) going to do that,” the woman is quoted as saying.

The source said the woman did not know at the time the identity of the person who had attacked her sexually that night.

He added that the woman did not tell her boyfriend about the incident out of concern that he had a temper and might go looking for the individual to deal with him physically.

The woman told the police that the second encounter with St Paul came shortly after she visited the Prime Minister to seek assistance in finding a job as she had just lost employment and was in desperate need of money to look after her children.

She said that Dr. Mitchell directed her to contact St. Paul and was given a telephone number to reach the top security official.

She spoke of calling him and when he came into the area to meet her it was then she recognised him to be the same person who had sexually assaulted her on the previous occasion.

“When I see him I say but no I know his face. He told me to come on the other side (of the vehicle) and I went around the other side and was talking to him and he said that we can’t discuss anything here – so come inside. We drove up not far from my house.

“We started to talk and I told him I’m looking for a job, the Prime Minister tell me to get in contact with you. So then he turn and tell me ‘something for something’. I asked him what he means by that, he tell me ‘nothing doesn’t work out so these days’.

“I used my left hand now and give him about three slaps in his face. He was still struggling with me. And how I was (sitting in the vehicle), I could look behind so I tell him, ‘look someone coming’ and the same time I ran out the vehicle.

The CID is now expected to meet with St. Paul to inform him about the allegation and to get his response before sending the files to the DPP office for advice on the possibility of bringing more sexual allegation charges against the key Security personnel around PM Mitchell.

A senior civil servant who has since retired told this newspaper that he had passed on information to a former Permanent Secretary in the Office of the Prime Minister about three female employees in his department who had complained to him about sexual advances from St. Paul.

The Permanent Secretary was contacted by THE NEW TODAY but was reluctant to give any information on the matter.