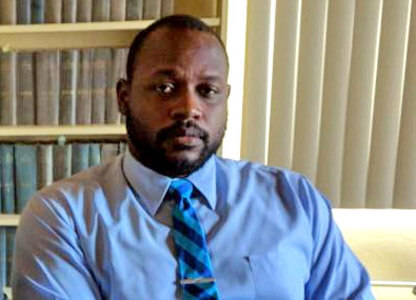 Secondary school teacher Donna Lusan has failed in her efforts to get a high court judge to rule against the decision taken by the former New National Party (NNP) government of Dr. Keith Mitchell to make deductions from the salaries of striking public officers during his term in office.

Lusan was the only public officer to approach the court to challenge the decision of the last government to withhold a portion of their salaries for taking strike action on the Pension issue.

Months later, the sitting judge Justice Raulston Glasgow delivered a landmark judgment against the Mitchell regime and in favour of public officers that they were entitled to receive a State pension in keeping with the requirements of the Grenada Constitution.

Appearing for Lusan in the matter was Benjamin Hood, the son of former Attorney General Cajeton Hood while the State retained Trinidad attorney-at-law Douglass Mendes, SC to put forward its case.

Prior to his ruling, Glasgow said that he had often dropped hints to Attorney Hood that he was facing an uphill task in the case.

Following is the Glasgow judgment on the matter:

Costs
[33] CPR 56.13(6) dictates that no order for costs should be made against an applicant for an administrative order unless the applicant acted unreasonably in bringing the claim or in the conduct of the same. I will, with some hesitation, order Ms. Lusan to pay costs to the Government. This is not a course upon which I embark lightly. The wisdom of CPR 56.13(6) is unassailable. The rule in CPR 56.13(6) that applicants for administrative relief should not be ordered to pay costs encourages litigants who are aggrieved by the exercise of powers by the Government or public officials to approach the courts for redress without fear of being “penalised” in costs. That is provided they act reasonably in filing a complaint or if they conduct the litigation in a reasonable fashion. I think that Ms. Lusan fails in the latter category. There is no dispute that Ms. Lusan was genuinely upset that the Government had not paid her for the days in question. Ms. Lusan did not act unreasonably when she approached the court for relief for her complaints.

[34] It is the manner in which this case was prosecuted that I have some issues. Litigants are always encouraged to engage the court’s process with vigour and passion in the pursuit of the vindication of their rights. But passion must be tempered by reason. It is in this context that CPR 56.13(6) prohibits the award of costs against a litigant except where that litigant acted unreasonably “… in the conduct of the application”. From the outset, it was more than apparent to this court and was so stated to counsel that the law was against Ms. Lusan except if the binding precedent in Sykes could be distinguished. At every hearing it was intimated to counsel for Ms. Lusan that notwithstanding his valiant efforts to distinguish the Privy Council ruling in Sykes there was no basis for the arguments raised. Even after the hearing, at the further case management, counsel for Ms. Lusan maintained a more than patently unsustainable posture regarding Ms. Lusan’s chances of succeeding on this claim. This is by no means an easy positon for me to take but the point must be made that litigants must conduct their litigation with reason. In the circumstances, I order Ms. Lusan to pay the defendants the sum of $900.00, that is, $300.00 each in costs.