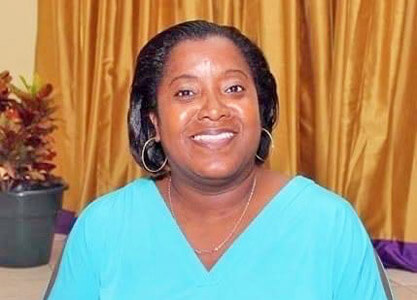 Donna Lusan – took the government to court and lost the case

Secondary school teacher Donna Lusan has failed in her efforts to get a high court judge to rule against the decision taken by the former New National Party (NNP) government of Dr. Keith Mitchell to make deductions from the salaries of striking public officers during his term in office.

Lusan was the only public officer to approach the court to challenge the decision of the last government to withhold a portion of their salaries for taking strike action on the Pension issue.

Months later, the sitting judge Justice Raulston Glasgow delivered a landmark judgment against the Mitchell regime and in favour of public officers that they were entitled to receive a State pension in keeping with the requirements of the Grenada Constitution.

Appearing for Lusan in the matter was Benjamin Hood, the son of former Attorney General Cajeton Hood while the State retained Trinidad attorney-at-law Douglass Mendes, SC to put forward its case.

Prior to his ruling, Glasgow said that he had often dropped hints to Attorney Hood that he was facing an uphill task in the case.

Following is the Glasgow judgment on the matter:

“It cannot be right that an employer should be compelled to pay something for nothing whether he dismisses or retains a worker. In a contract of employment wages and work go together. The employer pays for work and the worker works for his wages. If the employer declines to pay, the worker need not work. If the worker declines to work, the employer need not pay. In an action by a worker to recover his pay he must allege and be ready to prove that he worked or was willing to work. Different considerations apply to a failure to work by sickness or other circumstances which may be governed by express or implied terms or by custom. In the present case the plaintiff disentitled himself for his salary for Saturday morning because he declined to work on Saturday morning in accordance with his duty”.

[24] There is no obligation anywhere in law or in Ms. Lusan’s terms and conditions of employment stated before this court that obligates the Government, her employer, to pay her, the employee, for the days that she did not work. Or no such law or term of her terms and conditions of service has been shown to me that stipulates or requires that where the Government, the employer, wishes to deduct salary for Ms. Lusan’s failure to work, that the employer must engage disciplinary proceedings before doing so deducting sums from her salary.

[25] Now I agree that it would have been a wholly separate matter if the Government had taken the view that it desired to discipline Ms. Lusan for her failure to show up and perform her duties. The Government would then have been obliged to forward its complaint to the PSC with a request that the PSC take the necessary disciplinary action. Indeed the PSC Regulations (SRO 27 of 1969) state that absence from work without leave or reasonable excuse is an act of misconduct (section 53 of the PSC Regulations).

[27] With respect to discipline for misconduct, the Government, as most employers, may make a calculation as to whether the employee should be disciplined for a contractual infraction. As I have stated above, if the Government wishes to discipline the employee for failure to work as contracted, section 76(1) of the PSC Regulations requires the Permanent Secretary or Head of Department to present a report to the PSC asking that body to engage its disciplinary process. However, again, there is nothing in the PSC Regulations that says that the employer must engage a process of discipline, penalty or punishment whenever the employer says that you (employee) did not work for a certain number of days, thus you did not earn your salary for those days and therefore I do not have a contractual obligation to pay you a salary for those days. This is precisely what the Privy Council was saying in Sykes. Their Lordships opined at page 416 of the judgment that-

“Disciplinary proceedings may or may not be a sensible response to misconduct. If misconduct is found established, penalties as set out in reg 37(1) may be imposed, but these do not include an order for the whole or a part of salary that has been earned to be forfeited. A deduction to take account of salary that, by reason of unauthorised absences from work has not been earned, is not a penalty at all. It is a deduction necessary to be made in order to calculate the officer’s contractual entitlement to salary. This is a process unaffected by disciplinary proceeding or penalties.” (bold emphasis mine)

[28] So the foregoing in my view ought to put to rest the question of whether the Government had the right to refuse to pay Ms. Lusan for the days that she did not work. However, before departing from this discourse I must address shortly Ms. Lusan’s almost whispered allusion to (3) other matters. Firstly, Ms. Lusan says that she is a tenured worker. Counsel for Ms. Lusan makes the point that the PSC regulations in Part IX thereof makes a distinction between what Counsel terms the “regular employees” and Ms. Lusan, “tenured workers”. Counsel contends that it is only with respect to the former class of workers that a “regular employment contract” applies. By the description “regular employment contract”, Counsel explains that those are cases to which the “no work, no pay rule” may apply. With respect, I do not agree. For one thing, there is no explanation of the differences between the categories of workers identified by Counsel and how the common law ought to be applied in either case. I am fairly certain that my reading of the referenced provisions of the PSC Regulations and in fact the entirety of the PSC Regulations does not disclose a distinction between categories of workers for the purposes of the application of the common law rule in question. This ground of the claim is without substance and is accordingly dismissed.

[29] Secondly, counsel contends that in any event the dispute between the parties must move beyond this preliminary discourse. The court will have to conduct a factual hearing to determine whether Ms. Lusan was in fact at work on the days in question. I would have thought that this issue was now moot having regard to the fact that the Government paid Ms. Lusan for the days that she allegedly did not work. More significantly, in her own evidence Ms. Lusan averred that she turned up for work on the morning of the days in question, but she left her place of employment when she saw “no activities” at the school. I think Ms. Lusan by that statement puts to rest any factual dispute as to whether she worked on the days in question.

“6. Protection from deprivation of property

(a) the determination of his or her interests or right, the legality of the taking of possession or acquisition of the property, interest or right and the amount of any compensation to which he or she is entitled; and

(b) the purpose of obtaining prompt payment of that compensation:

(a) of this subsection the right of access shall be by way of appeal (exercisable as of right at the instance of the person having the interest in or right over the property) from a tribunal or authority, other than the High Court, having jurisdiction under any law to determine that matter…”

[31] At a basic level, for a section 6 application to be successful, the claimant would have to show that there was property in existence which was taken by the Government in a manner that violates the Constitution. There could be no argument that property exists in this case. Ms. Lusan did not work for the days in question and as such did not accrue income for those days which could be said to be her property. Indeed the rulings and reasoning in Sykes and Wakefield discussed above in this discourse could not make the position any clearer. Particularly, in Wakefield15 it was said that in order for the claimant to be successful in an action for wages in this context, he or she must show that at the material time he or she was ready and willing to work. An employee who is absent from work would undoubtedly be unable to prove the same. This ground of the claim cannot succeed as well and is dismissed.

[32] The long and short of it therefore is that this claim must fail. For the purposes of the laws of Grenada and in particular the relationship of employer and employee subsisting between the Government and public servants in Grenada, the common law rule of “no work, no pay” is quite alive. Accordingly the Government was not acting illegally or in violation of Ms. Lusan’s constitutional rights when it refused to pay her salary for the days that she did not work.