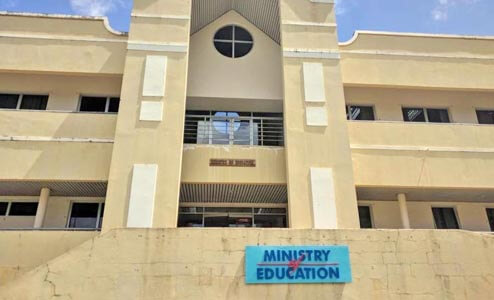 Police in Grenada have charged three men in connection with an incident at a secondary school in the city last Thursday in which one teacher was grabbed in the neck and assaulted.

The Police have charged all of them with Disorderly Behaviour and Trespass and Sheldon and Jamel were also charged with being in possession of offensive weapons.

THE NEW TODAY understands that the attack on the teacher stemmed from an incident with a female student who has been described as “a rude child.”

According to a school official, the student had something in her possession which was not supposed “to be school-wise so the teacher would have asked her to remove it.”

“She didn’t remove it so the teacher ended up taking it off and maybe in taking it off you might get a little pull or something like that.”

“The impression she gives her parents is that the teacher cuffed her in the head. She called home and they told her to come home. So she left school even without permission.”

Referring to the incident as “a very unfortunate experience”, the school official said that the student and her mother came back onto the compound on the same day but the principal was apparently reluctant to deal with them due to their hostile mannerisms and aggressiveness and it was decided to have the meeting on the following day.

He spoke of the family members showing up as planned but seemingly still had “a heated agenda” and it was felt that it was better to try and calm them down in order for the meeting to take place.

He said the family members were getting upset and were told in no uncertain terms “you need to calm down – we can’t start a meeting with that attitude and that was when things got out of hand.”

He stated that the teacher was in the office of the Principal and just as he was stepping out the family members grabbed him in the neck and also proceeded to force their way into the office and smeared the glasses inside there.

One eyewitness reported seeing blood coming from the nose of the child’s mother and saw her then using a cellphone to summon her brothers who on reaching the school jumped over the gate and onto the school compound.

The police were contacted and soon arrived on the scene.

The official told THE NEW TODAY that there is no corporal punishment handed down to students in the school as in past years.

“We don’t use any form of corporal punishment at all. What we have is (a) restorative approach as to how to discipline children so teachers are not under the obligation to hit – every matter has to be reported,” he said.

According to the official, the schools on the island are now coming under increasing pressure as parents are refusing to discipline their children at home and leave that responsibility totally up to teachers.

“They shift their responsibility, they’re not disciplining their children – their children coming (to school) any old way and then your efforts to discipline them seems futile. How’s that making sense?”

The official called on the Ministry of Education to establish a protocol to handle these issues and stop giving parents the impression that they have more rights than principals and teachers in these matters.

All three persons charged for the incident at the secondary school were each granted bail in the sum of $4,000.00 with one surety and are due to appear before a St. George’s Magistrate’s Court on March 9.