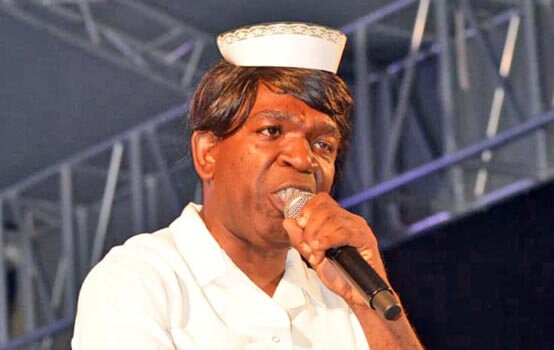 After 28 years in competition and 10 Calypso titles, the legendary Finley ‘Scholar’ Jeffery has bowed out of the race, with plans to “seriously” take on an administrative role to ensure that the Calypso artform in the country remains in good hands, and is sustained throughout generations.

The 53-year-old veteran in the calypso artform, the first artist to be crowned national Calypso King an enviable 10 times, made this disclosure in an interview with THE NEW TODAY, moments after dethroning the defending 2019 Monarch, Sean ‘Sour Serpent’ Niles, in the 2022 Calypso Monarch competition held last week Thursday at Progress Park in St. Andrew.

“This is my final competition for now, but I can’t leave kaiso. I won’t because I want to take up the administrative role very seriously and, of course, give guidance to the young people,” said Scholar, who is linked to the 3-year-old Grenville, St. Andrew-based Fireworks Calypso tent.

Placing second in the competition this year was former Calypso Monarch Kelly ‘Rootmans Kelly’ Clyne from the Grenville, St. Andrew-based Kaiso Bards Calypso tent on 525 points, with his renditions “Poli-comedian” and “World Song,” while the defending Monarch ‘Sour Serpent’, who also hailed from the same tent placed third on 520 points, with his renditions “Greenhouse effect” and “Opposition.”

‘Scholar’ is currently the leader of the Kaiso Bards Calypso tent, which launched the Fireworks Calypso tent in July 2019, to facilitate the influx of calypsonians at that time.

He expressed satisfaction that the top three (3) prize-claiming positions were captured by members from both tents this year.

“We got all the (top) positions so that makes me feel really good…,” said Scholar, who boasted of the Kaiso Bards and Fireworks tents, being “a very organised unit.”

The 10-times Calypso Monarch affirmed that although he “may not” be defending the Calypso title next year, he will continue making his contribution “to ensure that (the) calypso (artform) is in good hands.”

“What I am doing for Kaiso Bards, I can do it for the whole kaiso fraternity – it’s just for them to buy into it. I would want to manage all the tents because I think it makes more sense, and I’ll get more from them, and this is something that I want to push coming up,” the 10-times Calypso Monarch revealed.

However, Scholar cited a need for there to be a longer tent season, and for the Calypso artform to be taught in schools as an industry to ensure that the knowledge is passed on to the younger generations.

“We must have a longer tent season. We must have (an) industry of Calypso, Calypso has to be taught in schools. There has to be a way, because if you notice, beyond the juniors, you don’t see them again,” Scholar contended, referring to Elimus ‘Inspector’ Gilbert, Randy Isaac, and his son Filandi ‘Stunna’ Jeffery, who is a 2-times Junior Calypso Monarch, among the few artists, who have maintained consistency in the artform in recent years.

“So, we are seeing a few but the plethora of young people that pass through juniors, they disappear, and we have to find a way (to sustain the artform) because at some point in time, myself, Ajamu, Beast, Black Wizard, and so on, will be gone…” the 2022 Calypso Monarch contended.

As part of his legacy, Scholar, who has placed second in the finals on nine (9) separate occasions said: “I want people to say when I am gone that I did the best that I could for Calypso, for calypsonians, and that I came, I represented, and I was always up there because consistency is the main thing.”

“You have a lot of people they come, they go…and sometimes it’s hard to stay consistent. I have been doing this for the last 28 years, and I am always in the finals…” added the 10-times Calypso Monarch, who is also the one-time holder of the national Soca and Groovy Monarch titles.

The national competition, which is usually held on Carnival Sunday at the National Stadium in St. George’s, was moved to August 4th at Progress Park in the big parish of St. Andrew’s to capitalise on generating a greater level of participation from calypso lovers, who are said to be more in numbers on the eastern side of the country.

In an interview with THE NEW TODAY, after the show, Chairman of the Spicemas Corporation (SMC), Arley Gill, expressed satisfaction with the turnout, stating that the crowd was “arguably the largest audience in a Calypso finals in more than a decade.”

“I believe that the support that we received tonight augurs well to making a strong case to have the Calypso finals to be held in St. Andrew’s from next year and beyond,” added Gill, who, however, explained that this is “an analysis that we (SMC) have to make again after Carnival.”

“We have to look at it. I think it would be an easy sell now going forward to have calypso finals here at Progress Park or in St. Andrew’s,” the SMC Chairman added.