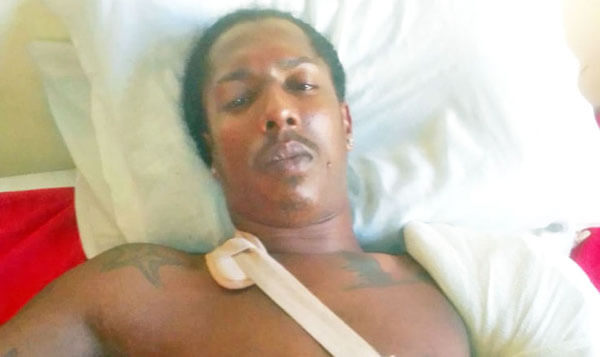 Amidst tension over the police shooting-to-death of a father in Fontenoy a week ago and the hospitalisation of his son from another gunshot days earlier by a member of the Royal Grenada Police Force (RGPF), a ganja-related charge has been slapped on the son who is now recuperating at his home.

Chris “Santa” Regis was shot on October 21 after police swooped down on him when he was spotted smoking a ganja spliff and days later, his father Trevor Regis went berserk and attacked three police officers before he was shot dead.

A family member told THE NEW TODAY that his nephew told him Wednesday that while he was laying on the hospital bed a police party paid a visit and informed that he was charged for possession of ganja.

According to the informed source, the visit took place two days after “Santa” was admitted as a patient for the gun shot wound to the shoulder.

He said that three police officers – two males and a female – came to him, identified themselves and had with them a plastic bag allegedly with ganja and a bail form which they wanted him to sign onto.

He said the officers told “Santa” that this was the ganja that they found at his home on the day of the incident.

“They told him if he did not sign both they would arrest him after he come out of hospital,” the family member quoted “Santa” as saying.

The family member stated that “Santa” signed only the “bail form” as suggested by the city lawyer and the police party then left the hospital.

THE NEW TODAY did not get a response from Head of RGPF’s Community Relations Department (CRD), Superintendent Vannie Curwen to a message sent to him on Whatsapp on whether the police had visited “Santa” at the hospital and charged him for ganja possession.

According to the family member, this visit by the police is rather suspicious as “Santa” was not told the amount of the bail and the date set for the hearing on the matter by the court.

He stated it was this incident with the police that triggered off the father to take retaliatory action against the police.

He said: “On Friday, the same day of the shooting, when the father went to the hospital to see “Santa”, he told him what the police had brought to him to sign. The father said to him, “You see how they’re trying to frame you” and he (Santa) also showed the father the X-ray on his phone with the (injured) hand.

Related:  Fisherman waiting on RGPF for answers to his ordeal on sea with U.S Coastguard

“The father then said, I cannot stay here at the hospital with you no more and left the hospital and then go and do what he did (attack the police officers)”.

The father reportedly stabbed a female police officer, cut a male officer on the hand and when he attacked a third was shot fatally.

The family member indicated that during a meeting between Supt Curwen and Acting Commissioner of Police, Edvin Martin and the family earlier in the week, the issue of the police visit to “Santa” at the hospital was raised with them.

He said that Supt Curwen was “shocked” to hear of this and expressed the view that no instructions were given to anyone in the force to visit the injured youth at the hospital on the matter and promised to launch a full investigation into the allegation.

“We are holding him (Supt Curwen) to that,” said the family member.

THE NEW TODAY was also informed that Prime Minister and Member of Parliament for the area, Dr. Keith Mitchell visited the grieving family on Wednesday afternoon at around 4.25 p.m. with a large contingent of bodyguards to express condolences.

The family member described the visit as “very warm and cordial” and said that the Prime Minister indicated that he had not received any report up to now from the police on the shooting of “Santa” three weeks ago much less the one with Trevor a week ago.

He said the family made a request to the Grenadian leader who is their MP to provide them with footages that the police have obtained about the shooting incident with the father.

There are reports that the police might have access to CCTV images of their own, as well as those from nearby businesses in the area like Courts and Clico.

According to the family member, the family want to see how the father was shot and whether the two bullets that hit him in the left and right legs were not sufficient to bring him down and avoid shooting him in the area of the chest.

“We want to see if after he was shot (in the legs) if they couldn’t control him. Why did they have to kill him?

The Prime Minister is said to have indicated to the family members that he would contact Commissioner Martin on the issue of the footage.

Trevor Regis will be laid to rest on November 16 at the St. George’s Cemetery.