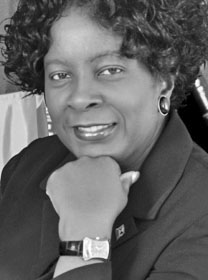 Ruth Rouse - the new Secretary to the Cabinet of Ministers

The Cabinet of Ministers has a new Cabinet Secretary in the person of Senior Civil Servant, Ruth Rouse.

Health Minister Nickolas Steele made the announcement at Tuesday’s weekly post-Cabinet Press briefing at the Ministerial Complex at the Botanical Gardens in Tanteen, St. George.

Rouse, the former Permanent Secretary in the Ministry of Legal Affairs took up her appointment on Monday, replacing Beryl Isaac, who was brought out of retirement by Prime Minister Dr. Keith Mitchell after he took the decision not to work with the then holder of the post, Gemma Bain-Thomas after the 2013 general election.

Rouse is a long-standing public officer who once served as Grenada’s High Commissioner in London and also Chief of Protocol in the Ministry of Foreign Affairs.

Minister Steele was not in a position to indicate if someone has already been appointed to replace Rouse in the Ministry of Legal Affairs.

In paying tribute to the outgoing Cabinet Secretary, the senior government minister told reporters that Isaac’s “vast knowledge and experience on matters of public service allowed her to provide the best advice to ministers of government.”

In the months leading up to her retirement, Isaac headed the Government Negotiating Team in salary talks for public officers with their representative public sector unions.

“She will surely be missed, she assisted everyone,” added Sports Minister, Norland Cox, who was also a part of Tuesday’s post-cabinet briefing.