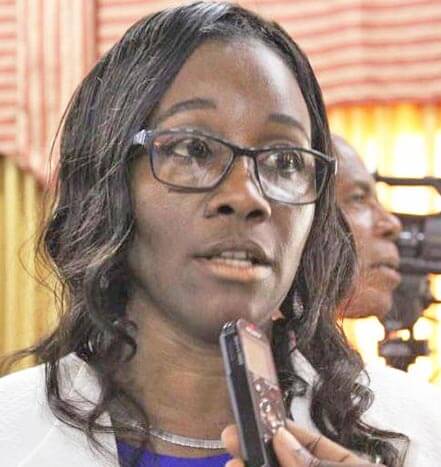 President of the Public Workers Union (PWU), Rachael Roberts has taken issue with the decision of the Keith Mitchell-led New National Party (NNP) government to appoint medical doctor Francis Martin to the post of Acting Permanent Secretary in the Ministry of Health.

Speaking to THE NEW TODAY, Roberts branded the appointment which was done by the Public Service Commission (PSC) as a waste of professional talent.

She said: “We have sidelined our acting CMO and placed him as a PS. Why is that happening? He is a trained qualified professional. Why are you wasting the resources of a trained qualified professional to put him as a Permanent Secretary when we know that there are persons trained in Management Skills, persons trained in leadership, persons trained with the necessary HR (Human Resources) qualifications to be able to take up Permanent Secretary positions? These things are really hurting us as a union.”

Dr. Martin was removed within the height of the Coronavirus pandemic as CMO and the position was given to Dr. Shawn Charles.

No reason was given by Health Minister Nickolas Steele for what appeared to some persons on the island to be a demotion for Dr. Francis from a prestigious and specialised position within the public service.

According to Roberts, the Dr. Martin case is very much prevalent throughout the health service on the island under the NNP regime and that far too many qualified persons in health are placed in jobs outside of their specialty.

The female PWU boss called on the Mitchell government to respect these professional and qualified persons in their respective fields for what they are really worth.

“Respect the trained people, the persons who are trained to perform those duties. We have these people performing other duties within the ministry that are not totally beneficial to us and these persons are trained,” she added.

Roberts pointed out that a similar thing is happening at the TA Marryshow Community College (TAMCC) with the under-utilisation of many staffers there.

“Why are we disrespecting our trained professionals? We would really want to see the Administrative Cadre within that college come up to speed so that the staff can become motivated, the staff can work to the standards that they have.

“We have staff with great ideas (and) skills within that institution who need to be utilised effectively.

The Mitchell government came under fire in the past when it appointed a qualified Engineer in the person of Works Minister Gregory Bowen to act in the position of Attorney General whenever the holder of the post Cajeton Hood was out of the island.

It stopped the practice when the Grenada Bar Association (GBA) criticised it as unconstitutional, stating that the person to occupy the position should be a qualified barrister-at-law.