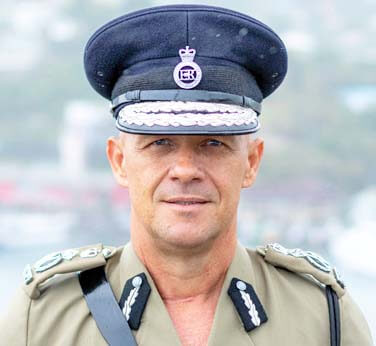 A Covid-19 scare has apparently engulfed the headquarters of the Royal Grenada Police Force (RGPF) under the command of Commissioner of Police, Edvin Martin.

Well-placed sources told THE NEW TODAY that virtually all the clerical staff at Fort George have been sent home and that only senior police officers can be found at their desks at the head office.

According to a police insider, a female individual who is an Imani from Gouyave and who works on the fort is positive on a Rapid test for the virus.

He said that a decision was taken by the Police High Command to send home from yesterday the Clerical Staff, many of whom are government contracted Imanis.

He told THE NEW TODAY that the Covid-19 scare within RGPF has hit at what he described as “the seat of power” in the country.

The source said that a lot of the Covid-19 issues within RGPF are happening with “the civilian Staff” who have been sent to work with law enforcement by the Keith Mitchell-led government.

He disclosed that a Rural Constable on the St George’s Port also Rapid tested positive for Covid-19 in recent days.

He said this individual along with another member of the Police Port staff have been sent home to be in quarantine.

He also said that an individual linked to the Police Station in Grenville, St. Andrew was also sent home on quarantine along with a member of RGPF’s Community Relations Department (CRD) who tested positive with the Rapid Test for the virus.

The source stated that RGPF is waiting on the results of the PCR test but the officer is experiencing “some very serious symptoms”.

Speculation is rife that the CRD person might have visited the female Imani at the Gouyave police station who tested positive for the virus in recent days.

When contacted, head of CRD Superintendent of Police, Vannie Curwen confirmed all these cases and said that RGPF is awaiting the PCR tests of all these officers along with others.

Grenada has seen a sharp increase in Covid-19 cases in the past two weeks as head officials say the Delta Variant strain is sweeping across the island.

Five new Covid-19 cases were announced by the Ministry of Health on Monday night bringing the total number of cases on the island to 230 since the virus started to affect the island in March 2020.