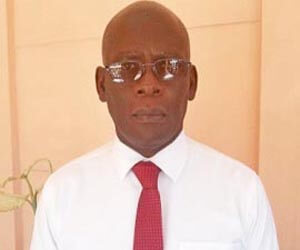 Curlan Gilchrist - anticipates increase in fees for government services in 2021

Although Finance Minister Gregory Bowen did not announce any new taxes for the coming year, speculation is rife that the Keith Mitchell-led government would move quickly in the New Year to increase rates of non-tax revenues to boost revenue collection as a means to help finance the 2021 $1.2 billion budget.

This view is held by former employee in the Ministry of Finance, Data Analyst and Consultant, Curlan Gilchrist, who told a forum on Sunday that he anticipates the government would increase the rates to generate more revenue.

Gilchrist was commenting on government’s plans to review its services and fees within the first quarter of the new year as revealed by Finance Minister Gregory Bowen in the 2021 budget statement.

The economist who was part of a panel put together by the National Democratic Congress (NDC) at a Town Hall meeting, pointed to the challenges in revenue collection due to the serious decline in the tourism sector and the collection of foreign exchange revenue due to COVID-19.

Noting that government’s revenue to finance the budget comes from recurrent revenue collected from tax revenues such as the Value Added Tax (VAT) and Income Tax; and non-tax revenues, which speak to fees for the renewal of licenses, lab fees at the hospital among others, Gilchrist expressed the view that “even though he (Minister Bowen) said no new taxes, it doesn’t mean that taxes would not increase as a means to get more money.

“…I anticipate that the population would see an increase in rates of fees for the services of government (in the coming year),” he declared.

“…That $243.6m helps the revenue projection to be $917.1m. So, you would have thought that if that’s your estimates of how much you would raise in revenue and grants, that you would now go and plan your expenditure but you will see later on that the expenditure planned is more than the revenue,” he said.

According to Gilchrist, a big component of expenditure for fiscal 2021 is “debt servicing, which has surpassed over $200m a year.

“And then we hear in the budget that debt stock would increase because of the airport loan and some other loans that they will take. So, our debt obligation is rising, our revenue is flat; so, the government does have a challenge in financing the budget…,” he said.

“And then you have Capital expenditure and this time they are projecting to spend over EC$305m. This year (2020), we only spent EC$122m out of a budget of $225m. So, we have fell short and since I’ve been around over 26 years around (in) the Ministry of Finance, we have never spent more than 60% of our budgeted capital expenditure, yet we are projecting $305.6m.

“There is (only) so much you can spend as a small country. Do we have the capacity to spend $305m in one year starting January? It has never been done in history, yet, it is a budget of hope.

Economist, Lennox Andrews, who also appeared on the NDC platform, expressed the view that the 2021 budget is “incomplete and unbalanced.”

“What we observe is that it is missing an important part…a budget has three main parts – a revenue, expenditure and financing and financing is missing (and) it’s important because it will reveal the real strength of the budget,” Andrews remarked.

In his view, the budget “seems to not provide the real hope and motivation required in this special period in our economic history,” given the “paradigm shift in the way in which things are to be done going forward,” which he pointed out “are not clearly manifested in that budget.”

Describing the budget as being “highly ambitious but unrealistic,” Andrews questioned government’s decision to focus the capital budget on the infrastructure and transport sector as the main economic reviving sectors in light of the devastating impact of the COVID-19 pandemic as opposed to strengthening domestic production in going forward.

“You will observe (that) capital budget is EC$305.6, 80% – of that money (most) is to be financed from external sources…so given that you have one main source for the financing of this budget, how realistic is that in this special period?

“What COVID has done is that it has shown us what we should do to our economy going forward…that even while an economy focuses on its competitive advantages it should simultaneously focus on production for domestic consumption.

“In other words, we should have a strong domestic economy on which we could depend on when events of this nature happen and in that regard one would have liked to see a greater focus being placed on domestic production, in particular agriculture production and contributing sectors like agro-processing…as a means of protecting ourselves.

“In fact, when you look at the Capital budget, which is the one that would stimulate growth in the economy, the Capital budget is simply saying that the amount allocated is EC$6M, which is about, 2% of the EC$305.6M that you have for capital spending.

According to Andrews, “there are some basic technical errors or short comings” in the budget statement as coming from Finance Minister Bowen.

He said: “For example, there are statements related to revenue growth but when you look at revenue growth they are not growing and are in fact less than what they were before. The numbers are very ambitious and one wonders really and truly whether or not the economy would rebound to that level to allow for a 6% growth having achieved a negative growth of 12% in 2020.

“So, in that regard, the hope and the motivation and the enthusiasm that you really want to see coming out of that budget is really not there because a lot of the statements, while they may sound pretty, in my view, they are highly ambitious but are unrealistic and therefore, the likelihood of those targets being reached is not there,” he added.

The Mitchell-led administration has taken a bill to Parliament to borrow EC$330 million to help finance the 2021 budget.