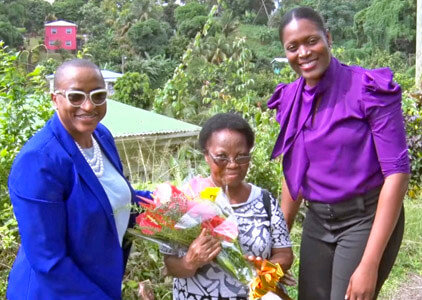 The 5-month-old Congress administration in St. George’s is expected to pay out a whopping $75 million to 525 eligible pensioners by the end of November, in what Prime Minister Dickon Mitchell has described as the “single largest transfer of wealth from the government to the citizens, in the history of Grenada’s post-independence.”

The Prime Minister made the remark at a special press conference in St. George’s last Wednesday, where he informed of the $15 million increase in retroactive pension payments, which was initially budgeted at $60 million, according to data from the Ministry of Finance.

Over EC$44 million has already been disbursed to pensioners in various sectors, and according to the Head of the newly established Pension Secretariat, Tonia Adams, the Ministry of Health dominates the bulk in this tranche of payments, with 200 successful applicants, while 50 were received from the Royal Grenada Police Force (RGPF), and 94, from the Ministry of Education.

The move to pay the pension, Prime Minister Mitchell said, “is not just a symbolic gesture,” noting that “we are talking here, fundamentally, about the well-being of our citizens.”

“If people work for 30, 40 years to build the State of Grenada, and we let them retire into poverty, it is the State, and the citizens of Grenada that we are doing a disservice,” he remarked.

The 45-year-old Grenadian leader, who symbolically handed over a cheque to an emotional senior pensioner, and former healthcare worker, Bernadette Jeremiah said, his administration is “happy to make good on this (campaign) promise,” and further encouraged the recipients to “use the money wisely.”

Related:  US$10,000 paid to ‘”Middleman” in Polish diplomatic passport sale

“I want to encourage all of you…invest if you can, and treat it as a pension, meaning, monthly, don’t spend all immediately because you have to be able to live off the pension as long as you’re alive and we all know as you get older health issues tend to crop up and you become more vulnerable so it is important that you bear that in mind,” PM Mitchell advised.

Permanent Secretary within the Ministry of Finance, Mike Sylvester used the opportunity to explain that the 525 new pensioners will now be “added to the payroll…as part of the pension payment going forward” and in the process increasing the pensioners list from 2200 to 2725.

This follows a High Court ruling by Justice Raulston Glasgow approximately three (3) months before the change of government in June, which established public officers who were denied pension for close to four (4) decades, are entitled to be paid a pension in keeping with the provisions of the Grenada Constitution.

Those persons who have applied but have not yet received payments are encouraged to contact the Pension Secretariat as soon as possible to resolve issues with regards to processing their application.