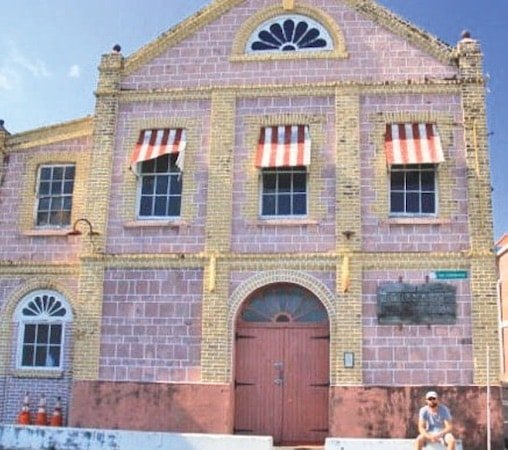 The Public Library on the Carenage has been closed since 2011

Government has appointed a two-member committee to start the process of rebuilding the Public Library in the city.

Education Minister Emmalin Pierre told reporters on Tuesday that Cabinet has taken the decision for herself along with the Minister of Foreign Affairs and Parliamentary Representative for the Town of St. George, Peter David to form the committee to spearhead the Library project.

The Public Library, situated on the Carenage, has been left in ruins since 2011 despite efforts to revive or completely build a new one by government for quite some time.

Minister Pierre told reporters that although there are a few infrastructural things to consider, funding has been the main reason for the delay in the construction of the library.

She said that part of the discussion will be whether to rebuild on the present location or elsewhere given reports that the old building is always flooded from sea water.

“… The question is as we build back better do we want to build where we are? So, that’s a conversation that’s taking place, it’s not a decision taken”, she added.

Minister Pierre announced that the committee will engage key stakeholders to arrive at a decision to take back to Cabinet on the location of the library and its possible funding.

She believes that government is at a place where it can identify possible sources of funding for the Library project.

The Education Minister also made a pronouncement on the Public Library in Grenville in which there is a Public/Private Partnership (PPP) arrangement in the making between government and the Grenada Co-operative Bank Limited (GCBL).

According to Minister Pierre, government envisages the construction of a particular facility that goes beyond a mere Library.

“… We don’t just want to be talking books, we want to be talking internet facilities and an upgraded version of what was there before. I am quite sure they are at the tail end of wrapping up legal and other administrative activities as it relates to that. So, very soon, we should see something happening there practically”, she said.