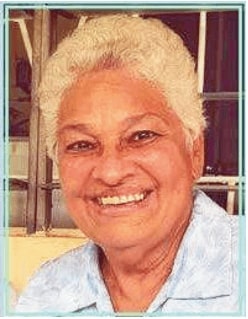 Those were the words uttered by former Grenada Deputy Prime Minister Bernard Coard who has been weeping almost every day following the passing of his wife Phyllis on Sunday at age 73 in a hospital in Kingston after a long battle with cancer and other medical complications.

Coard told a close friend that he had cried with every phone call received from persons who called to express sympathy on the sad news that his wife had died.

“I’ve cried with every phone call ….just can’t help it. (The) 6th September made exactly 52 years and 2 months that we were married….and I don’t regret a single day,” he was quoted as saying.

There have been mixed reactions from Grenadians at home on the passing of Jamaican-born Mrs Phyllis Coard who was disliked by many Grenadians who were suspicious of her role in the execution of Prime Minister Maurice Bishop on October 19, 1983 which brought an end to the Grenada Revolution as U.S and Caribbean troops stormed the island six days later to topple the coup leaders.

She was always cited as the person who influenced her husband to make a grab for power in order to control the then ruling New Jewel Movement (NJM) which toppled the Eric Gairy government in a coup d’état on March 13, 1979 and replaced it with the People’s Revolutionary Government (PRG).

The “Bishop killers” were sentenced to death by hanging but Phyllis was released from prison in 2000 on compassionate grounds, by the New National Party (NNP) government of Prime Minister Dr. Keith Mitchell to allow her to receive medical treatment abroad for cancer.

The Mitchell government had assured the nation that Mrs. Coard will be returning to Grenada after the medical treatment but this never happened.

Since news of her death in Jamaica where she was living with her husband started to circulate around the island, a number of locals took to Social Media to express their feelings about Phyllis Coard who was the sole female on trial for the murder of Bishop.

“… I held the view that at least she and her husband should have been hanged, doing so might (have) displayed a certain amount of justice…,” said one local while another remarked, “Her failure to apologise for her deed will be remembered. Hope she repented in private so she may rest in peace.”

Another angry Grenadian said: “She had to die in prison but the NNP say no let her go….,” another local woman uttered the words, “Wicked woman,” and another local chimed in, “I won’t be shedding any tears.”

A former member of a defunct party that was named after the late Bishop soon after he was killed, noted, “…I hope she had a chance to repent. May God find favour with her.”

There were some other Grenadians who had come into close contact with Mrs. Coard in her younger days and appreciate the help received from her.

A Grenadian professional described her as, “A loving mother, dedicated wife and much more. I publicly acknowledge on behalf of my family our profound gratitude for the eternal love and care that she bestowed on me and my three brothers while growing up in Jamaica.”

Another professional said, “May her soul rest in peace. Not always fairly judged by many,” and a local sympathizer added, “Humble woman, simple, honorable, virtuous. Many may have had political differences, but the content of our lives must be measured by so much more”.

A former revolutionary who is known to have close ties with the Coards’ remarked, “…As believers, we ask God to be lenient on us and on all sinners. We have all fallen short , but for the grace of God, it could be any one of us. We ask not for what one deserves, but for mercy.

And a former student of Phyllis Coard during her stint at AHS said: “I too wish to convey my condolences to Phyllis Coard’s family”.

A close friend of the family told THE NEW TODAY that Phyllis Coard had been ailing for a number of years and virtually spent the last few months in and out of hospital suffering from medical complications.

The source quoted a daughter of Mrs. Coard as saying that her mother died at a hospital in Kingston.

The medical doctor who was looking after Phyllis reportedly told the daughter that she was without pulse when they got to her.

“She was not breathing when they got to her. (They) tried to revive her (but it was) unsuccessful,” the daughter was quoted as saying.

According to the family member, Phyllis’ passing has shattered her husband, Bernard Coard who had been taking care of her personally over the years.

“For me listening to Bernard crying uncontrollably over the phone was highly emotional. He really, really, really loved Phyl,” he said.

Phyllis Coard was a member of the major decision- making body within the NJM known as the Central Committee (CC) and also served as the Deputy Minister of Information in the PRG.

She was also the President of the powerful National Women’s Organisation (NWO) which was an arm of the NJM.

During the Maurice Bishop murder trial, state prosecutors were able to convince the jury panel that it was the CC that took the decision to carry out the executions.

A key witness that provided the evidence for the Prosecution, headed by late Trinidad & Tobago, QC, Karl Hudson-Phillip was Cletus St. Paul, the former Chief Bodyguard to Prime Minister Bishop who was arrested by members of the Security Forces who were then loyal to Coard.

St Paul who is now facing a number of sexually related offences is now a key member of the Security Detail around current Prime Minister Mitchell.

His key evidence was that the CC Members held a meeting on Fort Frederick which is overlooking Fort George and voted overwhelmingly for the execution after Bishop was recaptured within hours of supporters storming his official residence at Mt Wheldale and freed him from house arrest.

The late Phyllis Coard came from a wealthy Jamaican family and was known to be heir to the Tia Maria coffee liqueur brand.