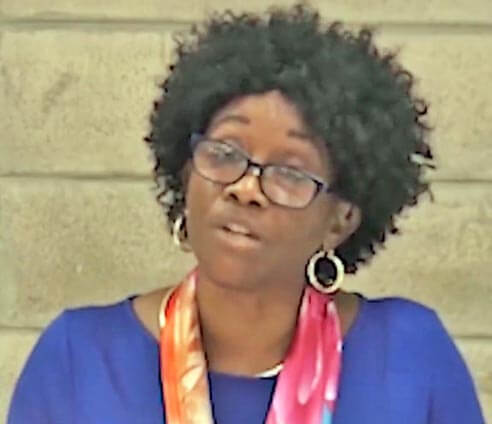 PWU President Rachael Roberts – is prepared to battle for her members

President of the Public Workers Union (PWU), Rachael Roberts has identified the resolution of the Pension issue for her 5000 strong membership through the law courts as one of the key issues for the organisation in 2021.

In an exclusive interview with THE NEW TODAY, Roberts said that the union has many grievances to overcome but the one that stands out at the moment is the lack of pension for members on leaving the service”.

“…Our pension matter is still in the court and we would really like to see that matter called for 2021. We have had some challenges with it – hearing that the files went missing etc. but then we were told that’s not the case – it was just a matter of miscommunication, the files are now with the judge,” she said.

“We actually got responses from the Registrar telling us that and still we have not heard our matter being called when it is with the judge. We would really like that matter to be called – it is something which is close to the heart – it is one of the main issues for public officers.

The pension issue arose from a decision taken during the era of the 1979-83 Grenada Revolution of late Prime Minister Maurice Bishop to suspend the Grenada Constitution which makes provision for Pension and to set up the National Insurance Scheme (NIS) as its replacement.

When Grenada returned to democratic rule of law following the collapse of Bishop’s People’s Revolutionary Government (PRG), a high court judge ruled in favour of a public officer who challenged the pension issue.

Current Prime Minister Dr. Keith Mitchell had said about three years ago that he was moving to restore Pension for public officers but to date it has never materialised.

In the wide-ranging interview with THE NEW TODAY, Roberts said that the other major issue on the agenda of the PWU for the New Year is the ongoing battle with government on the appointment of public officers to the service.

She stated that over the years, one has witnessed under the present administration in particular a certain level of discrimination against public officers amounting to what she said was “union bursting” tactics.

According to Roberts, government seems to be using this as a strategy not to give permanent employment to some members to the public service.

She said that as public officers leave the service, the government is bringing new employees into the service but on contract work and not giving them permanent employment with the Public Service Commission (PSC), the body that is recognised by the Constitution for recruiting public officers.

“As a union we know that government is violating the law,” Roberts said, adding that the law forbids the PWU from taking the matter to court since it can only be done by an individual public officer who is affected by government’s action against them.

She said that this is an issue that the union is reluctant to pursue legally given the long delays in court matters in the country as can be seen from its own Pension Disqualification matter.

She stated that the union would like to see the matter resolved with government in an engagement around the negotiating table.

She expressed fears that in the prevailing situation, the PSC might become no longer relevant but redundant.

Last year, a member of the PSC expressed the view that the body had become a rubber stamp under the NNP government, citing the number of appointments being made elsewhere to the service and then just being sent to the PSC for ratification.

According to Roberts, the PWU was also opposed to the appointment of the current head of the PSC, Beryl Isaac to the position within days of relinquishing the position of Cabinet Secretary under the Mitchell government.

She said: “We felt that this appointment was one that said to us that it was a political appointee because someone who just came out of the public service, has all the knowledge of what was happening, how government was oppressing public officers, may go to the Public Service Commission and we were very cautious that this could happen – very, very afraid that this could continue to happen in the Public Service Commission.

“We have had a lot of complaints from public officers about their appointments having to wait for long periods and it seems as if we are developing a public service again of Hollywood (where it is Actors on the stage),” she said.

Roberts indicated that the union is committed to putting an end to this sad state of affairs as the International Labour Organisation (ILO) and the United Nations are against this sort of appointment and the Government of Grenada is itself a part of the world body.

“It would be very embarrassing for them to be told that this is what the government of Grenada is doing,” she said.

The PWU boss pointed out that in Barbados, Prime Minister Mia Motley has signaled her opposition to this by taking steps to give permanent appointment to her public officers.

“Why is our government continuing to oppress public officers, and to discriminate against our membership? We would really want that to stop.”