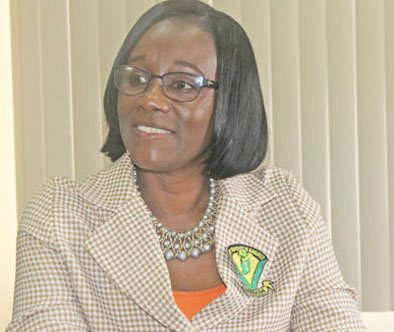 Public sector workers at the state-run T.A Marryshow Community College (TAMCC) are gearing up for another battle with the Chairman of the governing Board of the council, Augustine Vesprey.

Informed sources told THE NEW TODAY that the workers have decided to start wearing union t-shirts from tomorrow (Wednesday) to signal their displeasure over the treatment handed out to President of the Public Workers Union (PWU), Rachel Roberts who was on the compound Tuesday.

Roberts confirmed to this newspaper that she was ordered off the compound of the college on instructions from Vesprey who challenged the authenticity of the union to represent TAMCC workers.

However, Roberts declined to comment on the issue on the grounds that she wanted a peaceful resolution to the problem.

But a senior union member indicated that the PWU President was on the compound of the college earlier in the day to attend a sub-committee meeting of the board of which she is a full-fledged member for a
number of years.

He said that the meeting could not take place due to the lack of a quorum but Roberts decided to use the occasion of the visit to TAMCC to ask Vesprey on the status of a long-promised document that was
needed to address TAMCC workers on a contentious issue with the college.

Related:  Several students have not been engaged since the start of COVID-19

According to the official, the TAMCC Chairman pointed out that he would not give the document and then informed Roberts that she has no legal standing to hold any meetings on the compound with the workers due to an issue of certification.

The source said that Vesprey then summoned the female security personnel on duty and informed her that the PWU boss has no right to be on the compound.

“The lady on hearing this, started to walk towards our President who then told her do not touch me. The lady then said that I was not coming to hold you, I was only coming to tell you what Mr. Vesprey had said.

The PWU official stated that some union members at the college were informed of the development and called an impromptu meeting to discuss what action should be taken in the circumstances.

He spoke of a decision being taken to call on workers to start wearing their t-shirts from tomorrow to send a message to the TAMCC management.

THE NEW TODAY has not been able to get in touch with Vesprey for comment on the issue.

In November, PWU workers at TAMCC were engaged in protracted picketing of the college due to non-payment of EC$6.2 million owed to workers in increments.