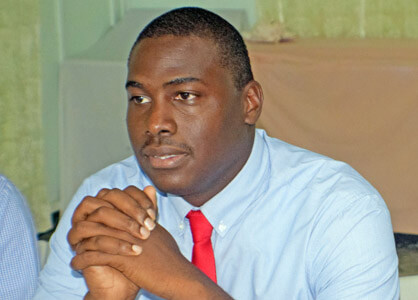 Minister for Carriacou and Petite Martinique Affairs Tevin Andrew - “in some cases, some people had to make a jail”

It’s almost three (3) months since the National Democratic Congress (NDC) of Prime Minister Dickon Mitchell defeated the longstanding Keith Mitchell-led New National Party (NNP) regime in the June 23 election poll, and at least two (2) government ministers have revealed the discovery of a series of corrupt practices and operations within the public service, which will soon be revealed to the general public.

According to Minister for Carriacou and Petite Martinique Affairs Tevin Andrew, the reality, based on some of the things that were taking place is that “in some cases, some people had to make a jail (but) they didn’t make the jail (and were instead) given a tap on the hand…”

The senior government minister was at the time addressing some of the challenges he has encountered since assuming office while appearing on a radio programme on the sister isle of Carriacou last week Thursday.

He said that “there is so much corruption” within his ministry and spoke of “one (1) entity that collected millions of dollars in one year” for services that are unaccounted for.

He also took issue with the fact that “the rules and regulations of the institutions are not being followed” to allow for “the public service to function the way it ought to.”

Also appearing on the programme was Youth, Sports and Culture Minister, Ron Redhead, who disclosed that “the Prime Minister is going to give the nation a full update as to the stage, the state and the situation of evidence of public corruption on one hand, and some of the inconsistencies that we have found on the other.”

“We have been able to observe a great deal of corruption, and what we are doing is to slowly but surely dismantle that,” he said.

The Integrity Commission (IC), which is the organisation that is responsible for ensuring there is integrity among public officers and public corporations, held a training session for media workers last week Thursday, as part of the 2022 Centre for Excellence Series Senior Leadership, and Management Training under the theme “Strengthening and Sustaining Integrity in the Grenada Public Sector Systems.”

Organisational Compliance Officer at the IC, Nicole Humphrey-Best shared the Commission’s work in terms of SWOT analysis to get the pulse and temperature of how public sector organisations are being run.

In response to a question posed by THE NEW TODAY during the question and answer segment of the approximately 2-hour session, Humphrey-Best explained that the process involves a systems assessment questionnaire that is administered online to the various statutory bodies, ministries, and departments, which seeks to determine their compliance levels to the legislation that governs their operations, anti-corruption practices, and administrative practices.

“When we receive their responses, we analyse this, and then along with our Operations Manager we prepare a report that goes first of all, to the Commission, and thereafter, upon the instructions and guidance of the Commission the report is then passed on or will be passed on because we have not yet passed on any of those reports that we have prepared (on) to the institutions,” the IC Organisational Compliance Officer informed.

“And, it’s not just a matter of passing them on but going and sitting with the heads of these institutions and discussing what we’ve recognised, what their strengths and their weaknesses are and giving advice as to how they can or what it is they can implement to improve in the areas where they are weak.”

Humphrey-Best told THE NEW TODAY that “because the matter is still before our Commission,” she was not inclined to disclose the discoveries that have been made at this time, however, assured that the information will be revealed once the process reaches the stage where the information can be made public.

Grenada is the home of the Center for Excellence in terms of the training of senior management personnel both in statutory bodies, and the public sector.

Head of the Commission Anande Trotman-Joseph said the Commission has “been calling corruption for what it is in a way that has never happened before in the history of Grenada, and the Caribbean as a whole…”

She also expressed the view that “we are beginning to see a culture shift to one of accountability and transparency” as the Commission works to stamp out corruption in Grenada.

According to Trotman-Joseph, the Commission has been “receiving complaints, some of them meeting the criteria of the Act, some not.”

“And, in response what we do is that we do training,” at least “two times a year,” in which statutory bodies, their heads CEO, boards, and public sector management generally, are engaged in training and education so that they will know what is expected of them,” she explained.

Trotman-Joseph said that sessions are also held within the Customs Department, Royal Grenada Police Force (RGPF), as well as the Grenada Cabinet and revealed that the Commission was scheduled to meet with the new Cabinet of Prime Minister Dickon Mitchell last week Friday, as part of a global best practice.

Additionally, the IC Head stated that the Commission is “also undertaking some organisational reviews across the board,” including with the Physical Planning Unit, which has been identified, along with the Marketing and National Importing Board (MNIB), by Prime Minister Dickon Mitchell, as state-owned entities that “require major urgent attention,” as the government rolls out its transformational agenda.

“We’ve gone also to the Physical Planning department prior, and again, we are working with them”, said Trotman-Joseph, who also alluded to the Commission facilitating additional training upon the request of some organisations, such as the Grenada Industry Development Corporation (GIDC), and the Carriacou Festivals Board.

She said the Commission is “using a preventative approach” in terms of providing education and training as to what is expected, what is required, and where private sector entities are going wrong.