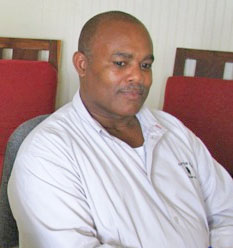 The Beryl Isaac-led Public Service Commission (PSC) is apparently shying away from taking decisive action in the Fabian Purcell matter in which the Head of the Physical Planning Unit (PPU) within the Ministry of Finance has admitted accepting payment for private work against the rules of the Public Service.

A high-level government legal official told THE NEW TODAY that he had seen correspondence in recent weeks in which the PSC appears to be reluctant to deal with the Purcell issue which was first brought to light by this newspaper.

According to the official, he gleaned from the correspondence seen that the Isaac-led outfit is seemingly adopting the position that it is hard pressed to find a legal basis to bring disciplinary charges against the individual who admitted that he had received monetary reward from foreign investors and did not seek the permission from the commission to engage in the private work that was undertaken.

The source said the impression is being given that the PSC is timid and worried that it might face a legal challenge in court by Purcell if any action is taken against him.

He stated that this seems to be a rather strange position being adopted by the body which is given powers under the Grenada Constitution to govern the entire public service and to take disciplinary action against anyone involved in wrongdoing.

THE NEW TODAY understands that since the allegation surfaced in December, the commission is yet to invite Purcell to appear before the body to answer the charges of alleged wrongdoing.

The legal official said that if Purcell had indeed admitted to what was reported in the newspaper article then there is no reason for the PSC to be “pussyfooting” on the issue and showing signs that it was reluctant “to go forward and do something”.

“To me once you admit (then) something can be done about it. I can’t see what the commission is afraid of because they have the ultimate responsibility (to handle the matter). If he (Purcell) wants to sue he would have to come with a good case because he admitted to something wrong based on what I read in the papers,” he admitted.

According to the legal official, he is suspicious that there is much more in the Purcell matter “that meets the eye” and that someone might be reluctant “to take action for whatever reason.”

“I cannot see how he can win this case after admitting to wrongdoing,” he remarked.

The official said he did not get the feeling after looking at the correspondence that the PSC is serious about addressing the Purcell matter since it did not even call in the Financial Intelligence Unit (FIU) to help investigate the matter, which touches on an exchange involving money.

PSC reluctant to touch Fabian Purcell“I would thought that the PSC would ask the FIU for assistance since it has the authority to ask the bank for information about the payment to Mr. Purcell,” he told THE NEW TODAY.

This newspaper understands that Purcell was due to return to work this week but the PSC has asked him to remain off the job for another two weeks.

Speculation is rife that the Isaac-led commission is thinking of transferring Purcell to another section of the public service instead of taking any disciplinary action against him.

It was last December that THE NEW TODAY broke the story about the payment received by Purcell from the operators of the failed multi-million dollar Shrimp Farm project in Victoria, St. Mark.

Purcell was visited in his government office and showed a wire transfer document in his name from the persons behind the project and admitted receiving the money but denied that he was engaged in an act of extortion of the funds.

The document bore the name of Manfred H. Soeffing, the former Senior Operating Manager Construction/ Engineering for the Grenada Sustainable Aquaculture (GSA), which was expected to create 400 jobs for residents in St Mark.

Another document that was showed to Purcell was one relating to a series of email exchanges between Soeffing and himself in which the PPU head requested payment to fast track the application by the developers of the Shrimp farm for an alleged fee.

It indicated that the PPU head provided his bank account for the developer to wire transfer the funds.

According to the document, Purcell asked for money when he realised that he was “left out of the deal” that the developers had struck with a Land Surveyor working with the government by the name of Venance Msacky who is no longer employed by the State.

Soeffing said: “In the first week of February 2017, we had hired a surveyor, who was a government employee, but also worked for private companies in his time off. He was on a list of government approved Surveyors, which had been handed to us by a Government employee. Fabian (Purcell) somehow heard about this and was angry that he had been left out of the deal.

“He (Purcell) suggested to us that if we would pay him the same amount as the down payment we had (paid) to the Surveyor ($2,600.00 US), he would speed up our application process and get our application on the agenda for the next Planning Commission meeting, which happened to be scheduled for the next day.

“Usually an application has to be turned in at least 2 weeks before the next scheduled Planning Commission meeting. This was going to save us at least one or two months. Due to the press of time, he (Purcell) told us to come to his government office (where) he dictated to my wife what to say on the application forms. My wife filled out the application forms in her own hand-writing. From the e-mails you can see that he sent us the wiring instruction for his bank account. As a cover he called it for “survey work done”, but he didn’t do any survey work. He only sent us copies of surveys the Grenada Government had previously done”.

According to Soeffing, he did not personally handle the wire transfer of the funds to Purcell’s bank but that it was done by the main developer of the Shrimp farm project himself, Soren Dawody who was responsible for raising the funds for the company through the sale of Grenadian passports.

“I didn’t make the decision to pay the money. I had no authority to approve or make payments, I was not a signatory on the company bank account. I merely informed my superiors of Fabian’s demands. The decision to pay was made by Soren Dawody who also executed the wire transfer”, Soeffing is quoted as saying in the document.

He spoke of Purcell becoming very “impatient” when he did not receive the funds but he was able to verify that the funds were indeed sent when he got a copy of the Wire Transfer from another GSA high-level operative, the late Leo Ford who received it from Dawody.

Purcell admitted to receiving money from GSA but denied that it was for helping to fast track their application for the Shrimp Farm project.

He said that he assisted GSA in doing a Topographical Site survey for the outline planning application for the project as that was deemed to be very critical for processing its application as Msacky who was assigned that work was very slow in getting it ready.

He also admitted that he helped in filling up the application form by the developers.

Purcell spoke of having to do the Topography work on a Geographic Information System (GIS) software but did it outside of the government department and that there was a cost to getting it done.

“I assisted in preparing the Topography for the site. I was asked if I can assist to do that and I said yes. This was not done on or with Government Software”, said the Head of Physical Planning.

Purcell also disputed the claim made by Soeffing that he was paid the equivalent of EC$7,000.00 as was paid to Msacky by GSA for prior work that was done for the company.

When asked if he had obtained the necessary permission from the PSC as is required by public officers to engage in private work, the PPU head kept silent with a stone face look and did not answer the question.

Purcell also kept his mouth totally shut when asked by THE NEW TODAY if he had paid Value Added Tax (VAT) to the State for the service that he rendered to GSA based on the fact that he admitted that he had collected a fee.

Msacky was contacted by this newspaper and denied the claim made by Purcell that he was slow in producing the Topography site survey for the GSA developers.