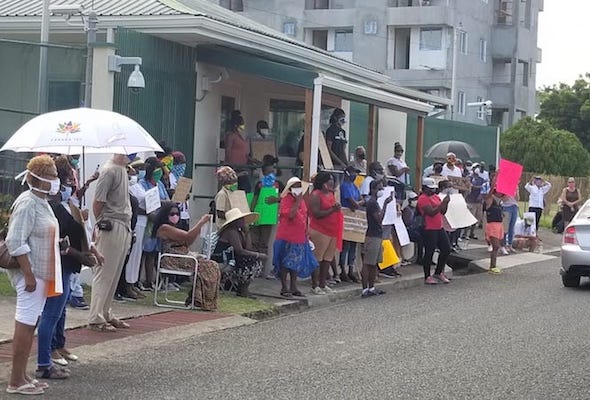 The U.S Embassy in Grenada has acknowledged that protest action was held Monday afternoon outside its building located in Lance Aux Epines.

A brief statement was issued by its Principal Officer at the embassy, Karl Duckworth.

It reads: “Guided by our founding principles of freedom and equality and our Constitutional charge to form a more perfect union, the United States supports free speech and peaceful assembly. We are committed to accountability and the elimination of racial discrimination. We support those who cry out for justice and the transparent judicial process to achieve it.”

The protest action was organised by a group of criminal defence lawyers headed by American-trained attorney-at-law, Jerry Edwin.

It attracted the presence of the island’s internationally-recognised soca artiste, Mr. Killa.

The protestors walked with a petition to deliver to the U.S Embassy to forward to Washington to express their solidarity with the Afro-American community who have been subjected to decades of racism at the hands of white supremacists.

The local embassy has indicated that ongoing investigations are taking place at the Federal and State levels into the death of George Floyd who was killed on the streets of Minneapolis by a white police man.

Floyd’s death sparked off violent protest action which has now simmered down into peaceful demonstrations through the streets of many U.S cites and around the world against institutional racism.

U.S Attorney General, Bill Barr on May 29 announced a federal civil rights investigation into the killing to help ease rising tension in the United States.