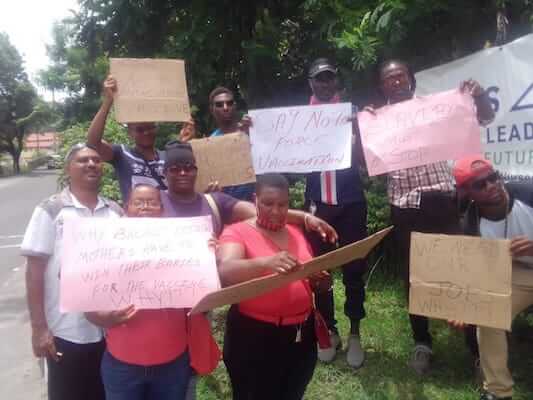 Workers at the Sandals resort in Grenada who have been laid off for not taking the Covid-19 vaccine have vowed to make their protest action much bigger in the coming days.

A handful of the workers who were given letters on Thursday to remain off-duty for the next three months assembled mid-morning Monday outside of the Ministerial Complex at the Botanical Gardens to alert the public about their plight.

A spokesman for the workers told THE NEW TODAY that they will be teaming up on Wednesday with other non-vaccinated workers from St. George’s University (SGU) to raise public awareness to the issue at hand.

The spokesman said that the workers would stage protest action outside of Sandals at Point Salines and also in front of CK’s supermarket along the Grand Anse main road and then on Friday take the struggle to Gouyave in St. John.

General Manager of Sandals, Peter Fraser sent out letters last week to over 140 employees informing them that the resort has been forced to take the action in light of a threatening letter received from the Acting Chief Medical Officer in the Ministry of Health, Dr. Shawn Charles giving a warning that the hotel could be blacklisted.

In the letter, Dr. Charles warned that the Ministry will declare Sandals to be “non-compliant” with government’s directive for all workers in the hotel sector to be fully vaccinated against Covid-19 if there is no increase in its 55% vaccination rate among the staff.

One of the protesting workers outside the Botanical Gardens made a plea for all non-vaccinated workers in the country to join the struggle with them on the issue.

Another of the affected worker who described himself as a Water Sports Instructor at Sandals told THE NEW TODAY that “what we have come out here to do is to sensitise the public on what’s going on in the country and at Sandals.

“We have been sent home unfairly because of a letter that was written by (name of government minister withheld) to the resort letting us know that all staff who refuse the vaccine would not be able to enter the gate as of last week.

“So we are here Monday morning to make a statement saying that we (are) going to stand up and just not sit back and let the victimisation continue. We are trying to make a stand right here now.

Another of the protesting workers said: “This has to stop – the victimisation and prosecution of the people”. Why should breast feeding mothers be forced to wean their babies to take a vaccination when they are saying that breast-feeding is best for babies?

A male employee of the resort made a pitch for the nation’s young people to join the anti-vaccination crusade among the workforce in the country and urged them to get up and stand up before “this vaccination gets to your doorstep”.

“Come out and stand up with us because we do not want a mass die-off of our population. What we are looking for is to call all the people of Grenada together –strength is numbers and numbers is strength,” he said.

The affected worker urged all Grenadians who are afraid of the Covid-19 vaccine now being administered on the island to contact them to join forces to make the fight bigger and to take the battle to the government.

A female worker indicated that due to a medical condition which includes blood clots that “unfortunately I will not be able to take the vaccine”.

Another worker said that some of the workers are now giving consideration to taking the vaccine as they do not have a choice because they need the pay cheque to pay their mortgages, and to look after their children.