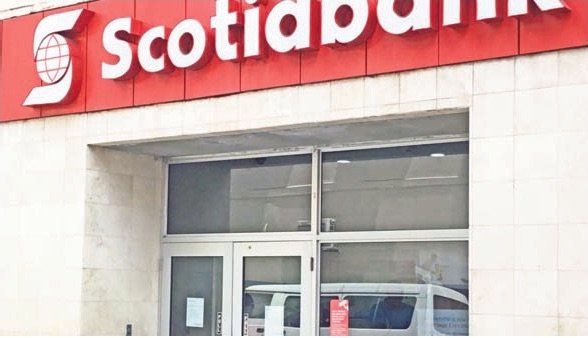 Industrial action has been taken at ScotiaBank Grenada as workers oppose the terms of their transfer to Republic Bank Limited which is owned by Republic Financial Holdings, which is set to become the new owner of Scotia in nine Caribbean territories.

The local bargaining agent for the thirty-five employees, the Technical and Allied Workers Union has confirmed that Scotia has been in ongoing talks with them regarding the pending sale.

Under the terms of the sale, Scotia employees are to be absorbed by the Trinidad-based bank but instead they are asking that Scotia, as their employer, acknowledge their right under the Employment Act of Grenada, to decide if they wish to be absorbed or to leave.

Banking services were interrupted at all branches earlier in the month.

In St George’s, workers staged a sickout, shutting the bank down for a full day, while at the Grand Anse branch customers were served up to 1.00 p.m.

The Scotia Country Manager said he could not comment on the action however he did say that if a resolution was not reached the bank could remain closed on Tuesday, the first working day after the Whit Monday holiday.

However employees returned to work after a one-day sick-out. They are entitled to two sick days without presenting a medical certificate.

During the past week, customers faced long waiting periods with many complaining about the unusually long lines at the St George’s branch.

The workers were seen dressed in black and wore red ribbons to signal their protest.

When bank officials met with Prime Minister Dr. Keith Mitchell to discuss the acquisition, assurances were given that all current staff will be absorbed into the new arrangement.

However, after a twelve month period some workers could lose their jobs through attrition.

President of the Technical and Allied Workers Union, Senator Andre Lewis said Scotia Bank does not want to give workers the option of deciding whether to transition to Republic or not.

The bank could face a multi-million dollar bill in severance packages if the workers have their way.

“They want to deny workers their right. Under the Employment Act, (the workers have a right) to not go over to the new employer Republic, if they don’t want to,” Lewis said in an interview.

He said if one or all (Scotia Employees) decide against being absorbed then they should be able to have the option of severance.

Under Section 45-2 of the Employment Act, where a business is sold the workers have the right to determine whether they will be absorbed or severed with the requisite compensation packages.

Lewis also pointed out that the merging of the two entities, through the US$123 million acquisition, could also affect Republic Bank staff.

“At some point Republic will do a head count,” he said.

There is also the issue of outstanding salary negotiations to be decided on and the Union would like to settle this before the merger since Republic Bank Workers are represented by a different Union, the Bank and General Workers Union.

The acquisition of Scotia interests in the nine territories will become final once the necessary regulatory approvals are granted in the various territories.

In March, members of Republic Bank’s executive team held a series of Townhall meetings with the staff of Scotiabank in the nine countries.

“These Townhall meetings were not meant to preempt the regulatory approval process but were intended to share some valuable insight on the Republic Group with the Scotia staff so that they could get to know us better”, said Baptiste.

“As an institution, we believe in full engagement of staff and, given their importance to the continued success of the operations in the various countries, it was important that the staff also be assured of the continued value to the successor organisations”, he added.