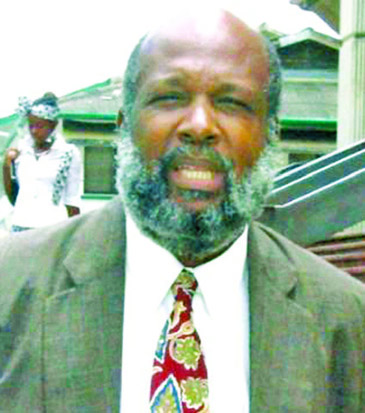 Phillip who will appear at the Gouyave Magistrate’s Court on Friday 26th June, 2020, is alleged to have intentionally caused the death of Shenelle Alexis, by unlawful harm”.

The office of the Director of Public Prosecutions (DPP) turned to Professor Daisley after an autopsy conducted by Pathologists at the St. George’s General Hospital could not give conclusive answers to the cause of death.

The charge was laid on Phillip Wednesday night after he was taken into custody for a second time by officers attached to the Criminal Investigation Department (CID) of the Royal Grenada Police Force (RGPF).

Police were forced to widen the scope of their investigation into the death of Shenelle after Professor Daisley handed in his report Tuesday which indicated that the evidence points to a death that was not natural.

He pointed out that the results of the autopsy seem to suggest that Alexis, a mother of two, apparently died from a botched medical operation that was not done within a controlled hospital environment.

He said it appears from the conclusions of Professor Daisley’s probe that some form of rigid instrument was pushed up into her vagina before she died.

According to the source, young Shenelle is believed to have died from excessive bleeding and the police are still looking to gather evidence to find out what might have caused the bleeding.

He said that Professor Daisley also found evidence of force being used to restrain the deceased young lady prior to her death based on impression seen on her legs and thighs.

He indicated that the police are also working on the theory that more than one person might have been involved in the botched medical operation that is now being linked to her death.

The source also said that Professor Daisley provided the police with information from his findings that contradicted a vital piece of the testimony given by Phillip when he was interrogated by the police.

The CID had always considered Phillip to be a person of interest in their investigation.

The police visited Victoria on Wednesday to search the home where Shenelle was staying with her boyfriend to look for additional evidence that could assist them in their investigation.

Sources told THE NEW TODAY that Phillip was held once again on Monday night by the police for further questioning.

One source said that the police also moved quickly to detain the murder accused based on information that the individual might have been trying to slip out of the country despite the closing of all the borders due to the coronavirus.

The former student of Anglican High School (AHS) was originally from Mardi Gras in St. Paul’s, St. George’s but moved a few years ago to live in Victoria.

The suspect had filed papers last week before the St. George’s No.1 Magistrate’s Court to fight Shenelle’s mother for custody of their two children who were moved from Victoria to Mardi Gras days after the death.

Attorney-at-law Derick Sylvester who was retained by Phillip to fight the custody matter was contacted Thursday by family members to represent him in the murder charge.

The Gouyave Magistrate’s Court is presided over by Magistrate Francine Foster who is expected to remand the murder suspect to the Richmond Hill prison and set a date for the start of the Preliminary Inquiry into the matter.