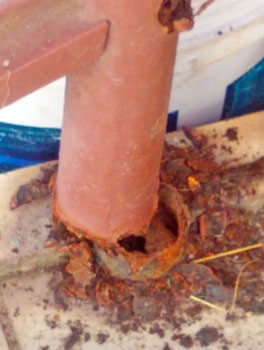 Residents of the Chinese-built housing scheme at Mt Rush in St George are calling on their outgoing Member of Parliament, Peter David to come to their rescue.

Some of the residents called THE NEW TODAY to complain about the deteriorating conditions of some of the houses.

“We are suffering at the Chinese Housing scheme at Mt Rush,” said one of the occupants who has been living in one of the units for the past 7 years.

According to the female resident, the building is cracking and feared it could collapse anytime.

“We are frightened inside here – we are trapped in no man’s land. We went to the Housing Authority on many occasions and complained about the situation and up to now no one came.” she said.

The female resident claimed that she cannot lean against her own railing because it is broken, and that the tiles on the floor are “raising up every day and that is making me sick”.

“I cannot take it no more inside here,” she remarked.

In addition, the resident of the Mt Rush housing scheme stated that she informed Minister David, an attorney-at-law about the situation but he is yet to visit the area to see firsthand for himself their plight.

Another male resident at the Chinese house who is homebound told THE NEW TODAY that he is also suffering from the conditions at the place.

He said that once upon a time he regarded Minister David as his best friend but now he does not even come up there to look for him.

He vowed to go to the poll on June 23 to cast a vote against him in the general election.

Minister David will be contesting the Town of St George constituency on a ticket of the ruling New National Party (NNP) against fellow attorney-at-law, Claudette Joseph of the main opposition National Democratic Congress (NDC).