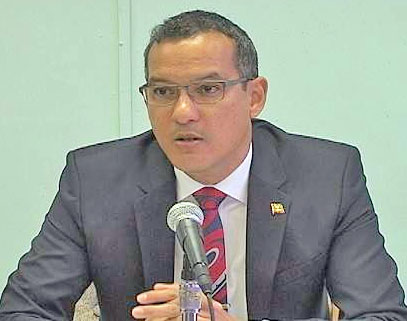 Health Minister Nickolas Steele is coming under fire for giving thought to privatising a part of the testing system in place at the Maurice Bishop International Airport (MBIA) to handle the coronavirus pandemic for incoming passengers.

Minister Steele was approached by THE NEW TODAY for comment on reports that he was planning to hand over the testing for COVID-19 at MBIA for incoming passengers to a private concern.

He said: “We are not looking at privatising testing but are exploring a private labour component. We are looking at all options. In fact we sent out an RFP to the medical fraternity. No decision so no official position as yet. Once we consider all options and make a decision we will announce”.

This newspaper understands that the government is looking at privatising that part of the testing where the services of nurses are required to assist in testing for the virus.

According to a leading private sector official, the island has a lot of work ahead to do in terms of improving on the process put in place at the airport including COVID-19 testing for incoming passengers.

He gave Minister Steele and his COVID-19 team a poor mark for the handling of a JetBlue flight two weeks ago at the airport in which it took 5 hours and 40 minutes to handle 83 arriving passengers.

He described as “delusional” the belief of health officials that the operation was properly executed and branded it as nothing but “a national disgrace and scandal” the length of time that it took to carry out the operation to process the passengers.

According to the official, it does not make sense for Minister Steele and the government to privatise any part of the testing since it is something that should be strictly controlled by the Ministry of Health and questioned whether or not an attempt is being made “to make somebody rich”.

“It reeks of corruption,” he added.

Sources told THE NEW TODAY that the Keith Mitchell-led government is looking at a private sector component in the testing due to concerns that the nurses on the government payroll will not be flexible in their working hours due to the condition of work with the Public Workers Union (PWU).

A source quoted a top government official as saying that the government might not be able to get nurses to do the job required at the airport during abnormal hours when a flight might land at MBIA.

He said the government is not against its own nurses who work on their off days and vacation with private clinics doing the job with a private enterprise who might be contracted for that purpose.

According to the official, he cannot understand why a shift system cannot be put in place by the government for nurses to do the assignment similar to the role performed at the airport by the Police including Immigration and Customs officers.

He warned that Grenada can become “more of a laughing stock in the region” by seeking to privatize a part of its testing system for COVID-19.

“I think this reeks of corruption and nonsense,” he said, adding that the government runs the risk of compromising the testing system.

“It’s not going to get faster- you are going to get what you paid for. To date, I am unaware of any place – whether it is international or otherwise that has privatised this aspect,” he told this newspaper.

When contacted, a spokesman for one of the leading Diagnostic clinics on the island said that his business did not receive the RFP as alluded to by Health Minister Steele but had heard the deal was already given to a competitor on the outskirts of the city.