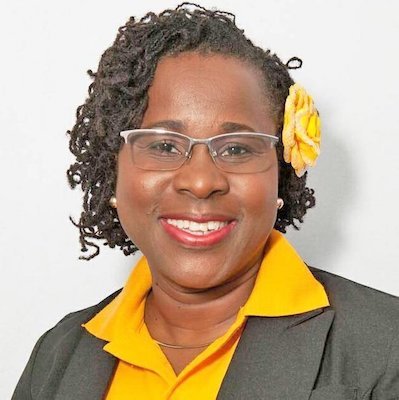 Claudette Joseph – is not undaunted by the threat of legal action

“But let me tell you this, you have the People of St Mark’s with you, you have the Parliamentary Representative and you have another investor, the Prime Minister, with you so don’t worry.”

These words, uttered by Prime Minister Dr Keith Mitchell, almost three years ago, at an elaborate sod turning ceremony for a failed shrimp production project, has now led to demands for hundreds of thousands in monetary compensation.

However, Public Relations Officer of the National Democratic Congress (NDC), attorney-at-law, Claudette Joseph seems to be standing by interpretation of the comments made by Dr Mitchell, when she told reporters that he had made claims of being an investor in the failed aquaculture project in St Mark.

Joseph received a pre-action letter from lawyers representing the Grenadian leader, which demands that she issue an apology, pay compensation of $350,000 and refrain from publicly repeating the statements which she made at a recent NDC news conference.

The letter from Nigel Stewart and Associates said, “You made certain statements on behalf of the NDC about our client which we believe are defamatory in nature, and geared to impugn on his good name, his standing and reputation.

“These statements are therefore completely false and malicious in all respect and were intentionally made by you to cause damage to our client’s reputation.”

Joseph said she would respond to the letter after conferring with her legal counsel and in social media posts over the weekend she dismissed the action as an intimidatory tactic aimed at quieting public discussions surrounding corruption allegations directed at Grenada’s Citizenship By Investment programme and the appointment of Diplomats.

At the news conference on November 2, Joseph along with former Prime Minister Tillman Thomas both raised the issue of corruption in Grenada’s Citizenship by Investment Programme after a recent documentary by Al Jazeera titled “Diplomats for sale” which highlighted questionable practices within the CBI programmes in Grenada and Dominica.

Joseph questioned the status of millions of dollars raised through the CBI programme for the Grenada Sustainable Aquaculture project which never went beyond the sod turning phase.

More than a year ago government announced that it had suspended applications for investment in the Shrimp farm project and would launch an investigation but to date there have been no reports on any findings or the status of the project.

Joseph directed reporters to a video online, in which she said the Prime Minister claimed to be an investor in the failed project.

In the pre-action letter, Nigel Stewart and Associates said, ““Our client denies uttering those words but merely to say that he has invested in the parish.”

Dr Mitchell acquired an estate Great House property in Diamond, St Mark and refurbished it for personal use.

Outside of the hiring of construction workers for the rebuilding and a small household staff, the property does not generate any income for the parish.

Joseph has seven days from December 13 to respond to the pre-action letter after which further legal action would be set in motion.

The lead attorney in Nigel Stewart & Associates is Nigel Stewart, the husband of the current Minister of Legal Affairs, Kindra Maturine-Stewart who is also an attorney-at-law.