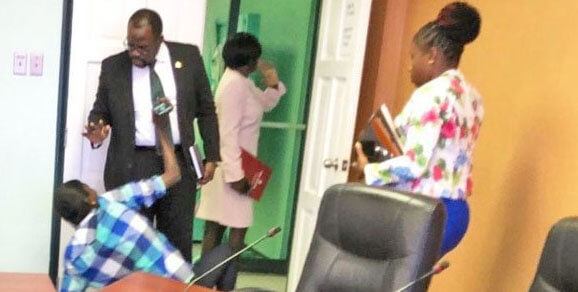 File photo of female journalist Calistra Farrier down on the floor in the encounter with Sen. Garraway pointing at her, while Press Secretary Philomena Robertson looks on

Grenada’s Prime Minister Dr. Keith Mitchell has dismissed as unimportant, an attack on a female journalist by a member of his government.

The Prime Minister offered his opinion on the incident last Thursday, during an encounter with a specially selected group of journalists.

Senator Winston Garraway who is currently on trial for assaulting journalist Calistra Farrier who was at the time interviewing Tourism & Civil Aviation Minister, Dr. Clarice Modeste-Curwen who is the Member of Parliament for St. Mark.

In his first direct public comments on the incident involving his former Minister of Information, which occurred in September 2019, the Prime Minister called the incident “frivolous”.

Dr. Mitchell made the comment against the backdrop of claims that he does not get involved in the affair of the Police Force and allow the men and women in uniform to run as an independent body.

He said: “I remember Minister Garraway on some – what I would consider frivolous case – was called in by the police about a particular incident, up to now I can’t know what it was for because it seemed so strange, in my view that a Minister was called in – and charged.

“Did the Prime Minister get involved? A minister of government, sitting in Cabinet you know.”

Amid the Prime Minister’s protestation of non-interference with the local Police Force is the 2013 dismissal of Commissioner of Police, Willan Thompson who was considered unsympathetic to the then incoming New National Party (NNP) government.

Thompson took the matter to court after he was summoned by Prime Minister Mitchell to his private home at Happy Hill and told that he had no confidence in him and should step aside.

In 2019, the Prime Minister meddled in the personnel matters of the police force when he blocked members of his security service who are under the jurisdiction of the Commissioner of Police from taking vacation.

Trade union leaders in Grenada are not seeing eye-to-eye with the Prime Minister on his utterances about non-interference in the running of the Royal Grenada Police Force (RGPF).

In the past week, several leaders have charged that Dr. Mitchell as the Minister of National Security must take responsibility for the police interrogation of President of the Grenada Union of Teachers (GUT), Jude Bartholomew for allegedly breaching Covid-19 Social Distancing protocols in connection with street protests by teachers in their battle with government for its failure to pay the agreed 4% increase in salaries.

Two union leaders – Bartholomew and President-General of the Technical & Allied Workers Union (TAWU), Andre Lewis have accused the Mitchell-led government of turning Grenada into a “military state” by the manner in which it was using the police force to quell the street marches of protestors in recent days.

The Prime Minister has challenged his accusers to present evidence that he has interfered with or tried to influence the course of investigations and operations of the police.

Dr. Mitchell offered a number of instances when members of his team and close aides have faced criminal investigation and charge, of which he said he never attempted to influence the direction or outcome.