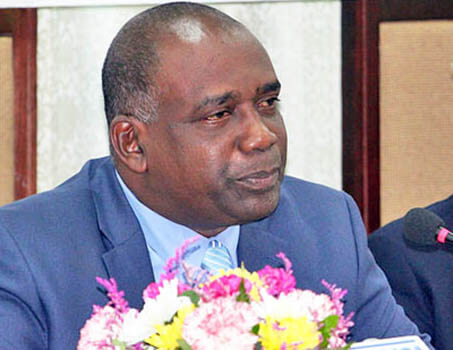 There are growing reports from within the ruling New National Party (NNP) that Foreign Affairs Minister Oliver Joseph will be overlooked as the candidate for St David in the upcoming general election.

A well-connected party supporter told THE NEW TODAY that Minister Joseph who won the seat in the 2013 and 2018 general elections is on the verge of being replaced by another person as the candidate for the national poll.

In recent weeks, reports surfaced that Ambassador to the United States, the Washington-based Yolande Smith has received the nod from Prime Minister Dr. Keith Mitchell to get ready to contest the St David seat.

The senior government minister is known to have met with the female ambassador and indicated that he intends to run again for one more time.

However, Ambassador Smith is quoted as telling aides that she is not bothered by what the minister said because the Prime Minister assured her that the seat will be made available to her.

The top party supporter said that virtually all the reports in the constituency from among top members of the NNP are painting a negative picture of the sitting Member of Parliament to be retained to contest the seat.

“Oliver (is) going. Nobody in St David’s ain’t want Oliver – not (even) NNP supporters,” she added.

The party supporter alleged that Minister Joseph spends most of his time at night in the shops and not engaged in serious political work on the ground.

“Every night – take your van and drive up St David’s – when one shop closes he goes by the next. That’s how he does it,” she said.

The activist who is considered as a professional on the island, said she is always baffled as to why Prime Minister Mitchell has often deliberately chosen over the years certain persons as loyalists to run as candidates for the party and “to be just be around him.”

She pointed out that since the 2018 poll the evidence was clear that Minister Joseph was vulnerable in St David.

She cited the fact that several government ministers “were living in St David’s” in the last 10 days of the campaign in 2018 to try and help the minister to hold onto the seat from former Interim Political Leader of the National Democratic Congress (NDC), Adrian “Persuader” Thomas.

In addition, she said that the ruling party was forced to hold a number of top meetings in the constituency to garner support for the minister and to ensure that the NNP was able to win the seat on Polling Day.

“What I am saying is that if they had to do that last election, they must have known for a very long time this was coming – why did he (PM Mitchell) allow it to fester?

He (Oliver Joseph) should have done just like what (Health Minister) Nikki Steele did – since now you put in a Caretaker because you know Nikki is not running – Nikki has made it very clear that he’s done with the politics.

(PM) Keith (Mitchell) should have been strong enough to make Oliver do that. Instead of that he’s sitting down up there complaining how he’s going to challenge the lady (Ambassador Smith).

If last election – four years ago, you had to beat up to make him (Oliver Joseph) win his seat and what he won Persuader by – just 300 votes – that is no votes.”

According to the party supporter, the thinking within the constituency is that more than 300 children have reached the age of 18 in the last four years and that is enough to ensure that Minister Joseph is voted out of office as they would most likely throw their support behind the 44 year old youthful Congress leader, Dickon Mitchell and not the incumbent MP.

Knowing one what they had to put out to make him win (in 2018) and knowing the shallow margin by which he won and recognising that St David’s got a lot of teenagers.”

The NNP supporter insisted that the party should have addressed the Oliver Joseph issue long before Dickon Mitchell came on the scene to take over the leadership of Congress and line up for the St David seat in the upcoming general election.

THE NEW TODAY understands that Ambassador Smith is due back home any time from now to pursue the St David seat in the upcoming general election.

Both the NNP and NDC have already started their campaigns for the poll which is due around the middle of next year but which most political analysts believe could be held this year.

Prime Minister Mitchell has already stated publicly that he has “the election bell in hand” and could ring it any time.