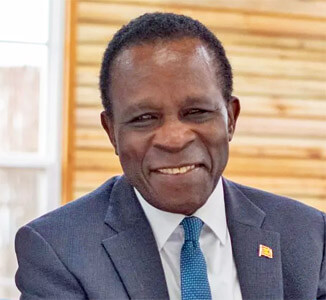 Defeated Grenada Prime Minister Dr. Keith Mitchell is coming under increasing pressure to relinquish the position of Political Leader of the New National Party (NNP) following its 9-6 loss at the polls on June 23 to the National Democratic Congress (NDC) of new Prime Minister Dickon Mitchell.

A party insider told THE NEW TODAY that the aging 75-year old leader is no longer a political force in the country and will not enhance the NNP’s chances at any future general elections on the island.

“Keith gone to the dogs – he can’t even get people anymore,” said the party official who was not happy with the decision taken by Dr. Mitchell to appoint the relatively unknown, Katisha Douglas as one of its three Senators to serve in the Upper House of Parliament.

“Keith can’t get to choose people again, nobody wants to associate with him – he’s lonely now, he gone” he said.

According to the party official who did not want to be identified, it is “a risk now” for anyone to get involved politically with the former Prime Minister since he is not in a position to offer them job security including a pension because he was seen as unbeatable and will be in power for a very long time.

The NNP leader suffered a shock defeat at the polls just over two months ago after enjoying clean sweeps in the 2013 and 2018 general elections.

The party official said he believes that NNP will “suffer” under the leadership of the defeated Prime Minister in trying to go forward against the Congress party with its much younger political leader.

He called on Dr. Keith Mitchell to step aside and hand over the party long before the next general election and to allow for someone else to emerge as leader of the group.

He stated that the current NNP boss should “back-off” from frontline politics as he has virtually become “a laughing stock now” among Grenadians.

“Everything he does people are laughing at him – they ain’t taking him serious,” he said.

The party official also commented on the choice of the NNP political boss to appoint Douglas as the replacement Senator in Parliament for former Legal Affairs Minister, Kindra Maturine-Stewart who pulled out at the last minute from the invitation on the grounds of family commitments.

He said that very little is known about the new Senator except that some years ago she was associated with a Baptist church in the Morne Delice area within the St George South-east constituency.

“I haven’t seen her for a long time – I don’t know if she is still a Baptist or not,” he remarked.

He added that if it is the intention of the NNP to groom Sen. Douglas to challenge Prime Minister Dickon Mitchell for the St. David seat in the next general election it might turn out to be a disaster for the party.

“It’s better he put back (former Foreign Minister) Oliver (Joseph). The girl is not known – she is not popular or anything like that,” he quipped.

“I don’t think she is in anything, I ain’t think so – she did no community service, she is not a teacher – you know that kind of popularity,” he said.

According to the NNP insider, the NNP will be better off asking former Ambassador to the United States, Yolande Smith to keep an eye on St David for the next general election.

“At least people know her – so that is easier to go than somebody who is not known on the ground at that level,” he said.

According to the source, there are many more worthwhile candidates that the NNP should have considered for the Senate position than Douglas.

“That girl will take a long time to grow in Parliament and she ain’t having much contribution to make either and it’s not like Keith could put her in some ministry – he ain’t have those powers because they lose (the election),” he said.

“He really can’t support her – all he could do is support her with one or two writings or one or two sentences to go in Parliament to talk about or give her to read – other than that I don’t think she is into anything. This girl that just popped up there – she can’t make it. I think the choice was bad,” he added.

THE NEW TODAY understands that Sen. Douglas was on the campaign trail with NNP in the just-ended general electron and served as Convener of early morning sessions held by the party’s strategy committee that involved Dr. Mitchell, General Secretary Roland Bhola, trade unionist Chester Humphrey and Pastor Devon Rachae and several others.

The NNP leadership is said to have taken the decision to hire some Jamaicans to help with the rebuilding of the party in time for the next general election.