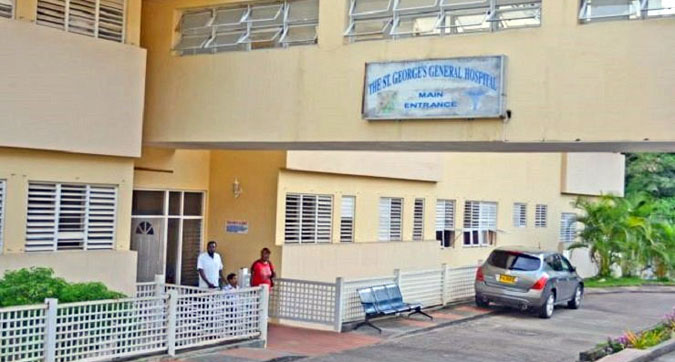 St. George’s General Hospital – where a patient reported insects in the Maternity Ward

A resident from the sister isle of Carriacou and his pregnant female companion have complained to THE NEW TODAY about the state of affairs at the Maternity Ward at the St. George’s General Hospital including the presence of roaches and centipedes.

The two spoke of the presence of roaches often seen running all over the sink that is used in the ward by pregnant mothers who are waiting on the ward for the delivery of their babies.

According to the pregnant mother, another female individual was in the process of putting on her slippers when she ran into a centipede.

She said that roaches can often be seen often coming up from the pipe where the water is flowing through.

“Not me alone that have that experience – it has people here who have that same experience,” she remarked.

The maternity patient also spoke about difficulties being experienced with food provided for them by Hospital Staff.

She said that there was food shortages last weekend and alleged that food that were not eaten by some hospital patients were recycled and given to them on the Maternity Ward.

The patient said that she and the other affected patients on the ward were reluctant to bring these things to the attention of nurses on duty, as well as the Hospital Administration.

“One of them tell a nurse but I don’t think she give any good reply,” she quipped.

According to the patient, it appears that the hospital is into rationing food.

She claimed that at times a patient will be given very little of substance at breakfast and supper like six to eight crix biscuits, a piece of fish and some grated carrots to make the plate look good.

The boyfriend charged that a lot of things are happening at the hospital that are not suitable for patients especially those on the Maternity Ward.

He said that apart from the food situation, it is unfortunate that roaches can be seen running all over the sink where the pregnant mothers have to brush their teeth.

When contacted, a senior nurse at the hospital told THE NEW TODAY that she would not dispute this account given by the patient because “that’s not unusual”.

Another senior nurse remarked: “Last time it was bed bugs. Ask them (the patient and boyfriend) to make a report to the Hospital Administrator Dr. (Carol) Mc Intosh, otherwise she’ll just say she’s not aware because she did not receive a report.”

THE NEW TODAY has submitted the complaint of the two individuals to Acting Permanent Secretary in the Ministry of Health, Dr. Francis Martin and Acting Chief Medical Officer (CMO), Dr. Shawn Charles but did not get any replies from the two senior health officials.