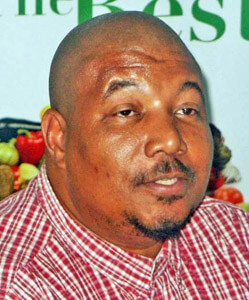 Sen. Roderick St Clair – wants fundamental changes to be made to the Task Force

In an exclusive interview with THE NEW TODAY, Sen. St Clair who was re-elected just over a week ago to serve in the Upper House of Parliament, said that the present construct of the Praedial Larceny Task Force (PLTF) is not allowing the members to provide better coverage for farmers.

He said the Task Force should not be a kind of adjunct to RGPF but that those involved should be entrusted with even the power of arrest.

“I have said that before, I have agitated to that,” he remarked.

According to Sen. St Clair, the PLTF unit should be having ranks like Corporals and Sergeants as presently the members of the Task Force are just Rural Constables which do not have any rank with the police force.”

He called on the newly installed Congress government of Prime Minister Dickon Mitchell to take the necessary steps to ensure that the Task Force is fully incorporated as a Division within RGPF and for the members to have ranks like Corporal, Sergeant or Inspector.

Sen. St Clair pointed out that members of the unit not having a vehicle to move around to perform the job is an issue but the lack of administrative framework in place is a much more severe problem.

“This needs to be addressed and I don’t know why we should be fraid to do that – it’s the right thing to do,” he said.

The farmers’ representative noted that in Trinidad and Jamaica, the Rural Constables have ranks within their respective police forces and highlighted the fact that in some of these places “you might have a Sergeant responsible for a group of Praedial Larceny Officers at the lower scale.”

“In fact, they (PLTF members) don’t even have arrest powers because they are not police. We need to humanise and make that work (and) become what we refer to as a decent job vs how it is right now,” he said.

“What is happening right now with the Praedial Larceny Task Force – you go in there with these green clothes and your aspiration is – how do you get into the Police force?”

“So in the next 2 years, you may see one in a police uniform so immediately he’s not in the Praedial Larceny anymore. So what you find happening is a breaking down of that and as that breaks down there is no replenishment.”

“So you move from almost thirty-something to forty Praedial Larceny task force people over the last how many years to less than half that amount today. So there is no way they could deliver, but if those folks are in that system they can get all the incentives, all the job security, all the benefits as a police person and the farming community will also benefit.”

“So when you speak to them they are demoralised – They speak to me on a regular basis.”

The theft of produce from farmers has often been identified as a major problem in the agricultural sector.

THE NEW TODAY understands that persons serving as Rural Constables within the Task Force are paid from the Police Budget.